10 Years of Cooking up Change with Instructor Dan Leszczewicz 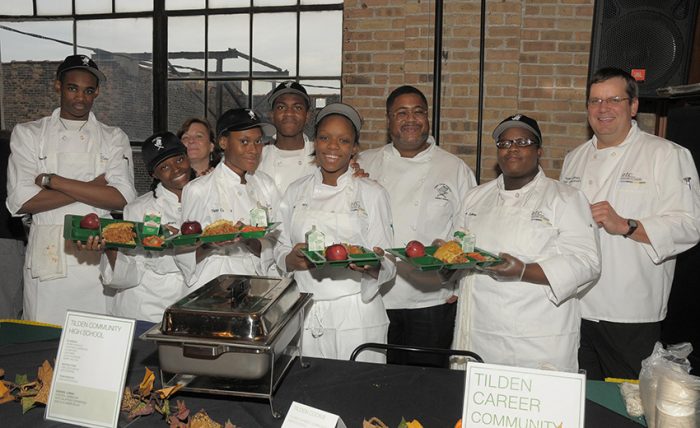 His favorite meal was Chicken Jambalaya with Jalapeno Cornbread and Cucumber Salad, which won Tilden first prize in 2009. During that year’s trip to Washington, D.C., one of the student chefs was given a camera by the filmmakers behind the documentary Lunch Line, which followed the team around. She aspired to be a filmmaker and was able to capture much of that trip. Now, she works in filmmaking in Hollywood, Dan says.

Dan remembers seeing the jambalaya on the menu at Chicago Public Schools for a few years after the win, and says ensuring students like and want to eat healthy school food is so important. “They can make the lunches as healthy as they want, but if the kids aren’t going to eat them, it doesn’t matter,” he says.

Dan now works at Clemente, where the students are preparing a menu of South American Roasted Chicken and Rice, Spicy Beans and Zesty Pineapple Toss-up that they hope will wow judges and guests alike.

The Cooking up Change instructors are such an important part of the Cooking up Change program, and we’re so lucky to have had Dan with us for 10 years. If you’re in Chicago, please join us on Nov. 17 to listen to what these talented young chefs have to say about healthy school food and taste Clemente’s South American Roasted Chicken and 10 other great menus. All proceeds from the event go toward our mission to improve school and student health in Chicago and across the country. If you are from outside of Chicago or cannot attend, you can make a donation or enter the grand prize raffle.