10 Years of Cooking up Change with Mentor Joel Nickson 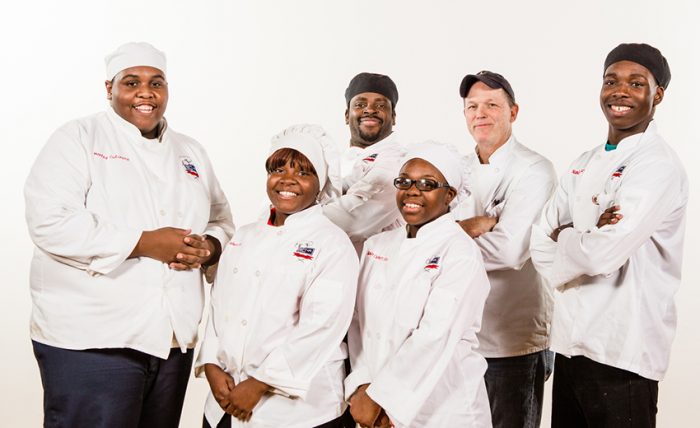 Looking back on the 10 years of Cooking up Change competitions, we come across so many amazing individuals who have been with us since the beginning. Joel Nickson, the executive chef and owner of Wishbone Restaurant, has been involved with Cooking up Change since the first one back in 2007. For the first two competitions, he served on the judging panel and, most recently, he has been a mentor for the student culinary teams. “It keeps me young, hanging out with the kids,” he says.

This year, Joel is working with the student chefs at Dunbar Career Academy High School. The team has been working hard with Joel to create their menu of Baked Chicken D’Bar, Mighty Cabbage with Carrots and Peach Yo to share with the judges and guests at the 10th anniversary of Cooking up Change on Nov. 17.

Joel says the students get a much clearer understanding of how the food system works and what food costs. “In Chicago in these schools, a lot of these students are in low-income environments,” he says. “Food dollars are even more important. It’s really important for them to understand the process and then make the decision from there.”

But the effect of Cooking up Change goes further than a winning meal or a better understanding of food service; many of these students go on to work in the culinary community. Joel has hired several of the students he’s worked with for festivals and seasonal work. One of the students even worked at Wishbone full-time after she graduated high school and before she joined the Navy.

The Cooking up Change mentors are such an important part of the Cooking up Change program, and we’re so lucky to have had Joel with us for 10 years. If you’re in Chicago, please join us on Nov. 17 to listen to what these talented young chefs have to say about healthy school food and taste their delicious meals. All proceeds from the event go toward our mission to improve school and student health in Chicago and across the country. If you are from outside of Chicago or cannot attend, you can make a donation or enter the grand prize raffle.