A Colorful Win at Cooking up Change Orange County 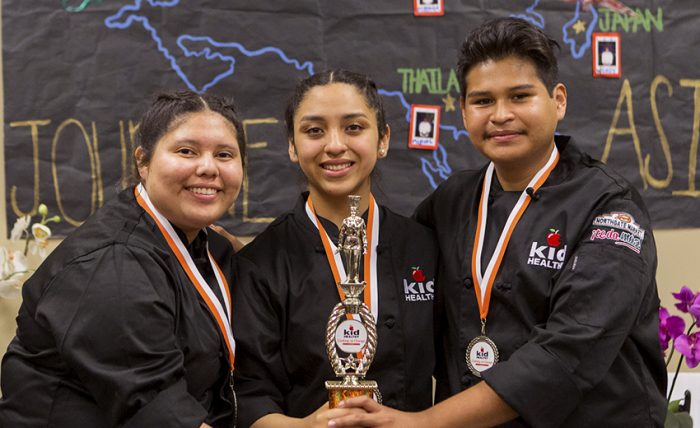 They say you eat with your eyes first, and the team from Santa Ana Unified School District took that to heart when designing their meal for the Cooking up Change Orange County competition. “My inspiration was mainly wanting something new and colorful,” says student chef Miguel. “We wanted it to stand out.”

The team looked toward ethnic cuisine to find the perfect dish to recreate. “We know Asian foods are flavorful and colorful,” says Fernanda. The team decided to create a favorite dish—orange chicken—with one small change that makes the dish much healthier. “One culinary technique we used is changing the cooking process to baking to make the food crispy, not oily,” says Wendy.

That dish, along with the rest of their menu of Spicy Thai Slaw and Momo Otsu Mugi, won first place for Fernanda, Miguel and Wendy in the competition in April. Cooking up Change Greater Orange County was hosted by Kid Healthy with support from partner sponsor Northgate González Markets. This was Greater Orange County’s seventh time participating.

Each student chef gained an understanding about why it’s important for schools to offer healthy school food. “It is important to me because in my city we have the highest rate of childhood obesity, and I want to make a change,” says Miguel. Santa Ana, where all of the Orange County student chefs live, has the second highest youth obesity rate in California. Nearly 50 percent of youth are overweight.

Students across Orange County will get to try this healthier version of a Chinese classic. The team hopes their dish can serve as an inspiration to serve more flavorful and colorful food in cafeterias.

The team from Orange County will join other teams from across the country at the Cooking up Change national finals in Washington, D.C., in June. Healthy Schools Campaign’s Cooking up Change contest challenges high school culinary students to create healthy, great-tasting meals that meet the real-life requirements of the national school meal program. Cooking up Change serves up life-changing opportunities, helps students realize their own potential and puts student voices front and center in the national dialogue about school food.