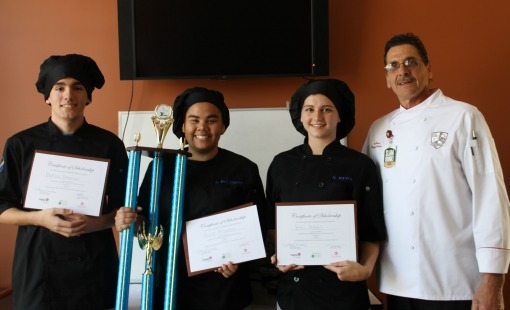 “I’m going to Disney World” is a phrase often uttered after a big win, but for a few student chefs from Jacksonville, Fla., their big win came after a trip to Disney World’s Epcot International Food & Wine Festival where student chef Alyssa M. tried a chicken gyro and thought that it would make a perfect recipe for Cooking up Change, Healthy Schools Campaign’s cooking competition that challenges student chefs to create school meals, following strict nutritional and budgetary requirements, that their peers would enjoy.

The Cooking up Change competition not only serves as a way for student chefs to create meals that appeal to their peers but also to show that school meals can be healthy, delicious and meet the requirements. “Cooking healthy food is not as hard as people might think, but it is pretty difficult, especially when you have to stick to an ingredient list,” Alyssa M. said. “It’s a challenge, and I like it. When you’re able to make a recipe that’s healthy and also tastes good, it just makes me excited.”

Because the teams are only allowed to use 10 ingredients for the main dish and side dish, picking ingredients that provide a lot of flavor was important, said Bradley P. The team ultimately chose green bell peppers, granulated garlic and cilantro to give their gyro a kick.

The winning Jacksonville team will spend the next few months fine-tuning their preparation and presentation before going up against other winning teams from across the country in June at the Cooking up Change National Finals in Washington, D.C.

Congratulations to the Frank H. Peterson Academy team — and all the Jacksonville student chefs — for proving that school meals can be healthy and delicious!

Here are the other four teams that competed in Jacksonville:

Previous
How D.C. Public Schools Gets Buy-In from Picky Student Eaters
Next
Our Commitment to Space to Grow Schools