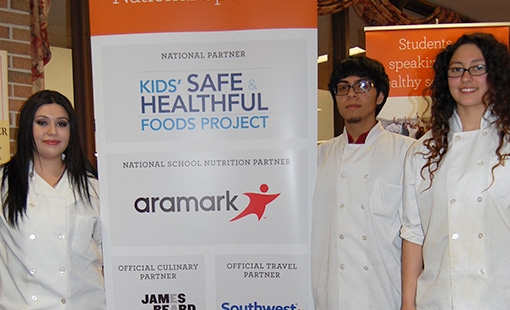 Guillermo said the team was hoping to come up with a unique recipe that would offer students more variety than pizza — a current favorite in the cafeteria.

But the team had to get a little creative as many of the spices they originally wanted to include — Cajun seasoning, for example — were not on the approved ingredient list. The Cooking up Change competition not only challenges student chefs to create healthy meals their peers enjoy, but to do so while adhering to the nutritional guidelines, budgets and product lists of the National School Lunch Program.

What did this teach the students about the school lunch program and healthy cooking? “I learned that we don’t need a lot of ingredients to make something tasty,” Alondra said.

Guillermo said his family cooks healthy meals and that healthy eating sets up the next generations for success. “I learned that cooking healthy can be fun and inspirational,” he said. “Healthy cooking should be in everyone’s life because it can help combat childhood obesity.”

The winning Detroit team will head to Washington, D.C., next week to compete against other winning teams from across the country on June 8 at the Cooking up Change National Finals.

Congratulations to the winning Detroit team — and all the Detroit student chefs — for proving that school meals can be healthy and delicious!