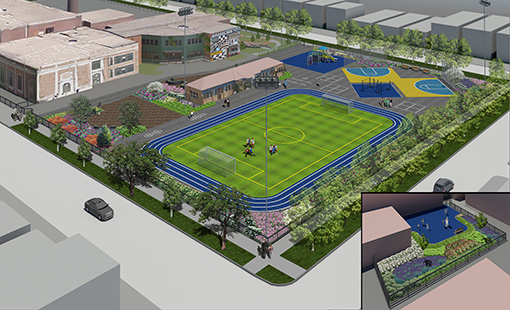 Good for the school and the community

Space to Grow is an innovative partnership led by Healthy Schools Campaign and Openlands to transform Chicago schoolyards into centers for outdoor learning, play and engagement with nature and art. Designed to capture significant amounts of rainfall, Space to Grow schoolyards have the added benefit of protecting the environment and reducing flooding. Construction began in July at four pilot schools and the schoolyards are scheduled for completion this fall. Space to Grow is made possible by the leadership and generous financial support of Chicago Public Schools, the Chicago Department of Water Management and the Metropolitan Water Reclamation District of Greater Chicago.

Principal Michael Beyer spends a lot of time outside on the school grounds of Morrill Elementary School during the summer. He estimates that he and his vice principal have spent a couple hundred hours watering Morrill’s existing school gardens. Needless to say, he’s pretty excited that his school’s new Space to Grow schoolyard — a full-scale renovation that will be completed this fall — has been designed to allow Mother Nature to water some of the gardens for him. A downspout from the school’s roof is being disconnected from the city sewer system and will feed rainwater into a new rain garden. There, plants with long, thirsty roots will thrive on this extra dose of H2O.

It’s good for the school’s operations and for the environment, says Beyer. “Having the downspouts disconnected and feeding right into the garden will help a lot. And kids will learn the value of doing this kind of stuff at their own homes.”

Plus this feature and others will help reduce local flooding, which is no small thing for the school’s neighbors.

Morrill’s new schoolyard will do much more than manage rainwater. New play surfaces, including basketball courts and a soccer field, will have a big impact on school athletics and will bring community members out to join in on the fun.

Beyer says: “Soccer, flag football, basketball, cross country… those are all difficult to play when all you have is an asphalt field. Inevitably, soccer players are coming back with bruises. This soccer field is going to be a game changer for our families. People will come out at night to play.”

These new play areas feed into an idea called “positive loitering,” which means that filling the space with active kids and families keeps it safe for everyone.

Beyer says: “Having a common space like this brings us back to the day when there was a community center where everyone interacted.”

The lack of physical barriers promotes this broader kind of openness, says Jaime Zaplatosch, director of education at Openlands. By design, the schoolyard isn’t straightforward for a pedestrian to cut through, keeping it from becoming an easy shortcut. But it’s not closed off, either.

“There aren’t any locks and there aren’t a lot of gates,” she says. “The more people feel like [a schoolyard] is part of their space and their community, the more likely they are to respect it. That’s been a topic of discussion throughout the planning of all Space to Grow schoolyards.”

From absorbing rainwater to providing a community-oriented space for running, jumping and playing, the impact of Space to Grow is truly vast.

Beyer says: “I go walk around the field, and I get choked up… the roughest kids in the neighborhood all walk by and call out to me, and say thanks for doing this. It’s literally affecting thousands of people.”

Morrill's groundbreaking ceremony.
Previous
It Takes a Village to Plant a Schoolyard
Next
‘The Reason Chefs Become Chefs’: Q+A with David Blackmon