Amplifying Student Voices in the National Conversation about School Food 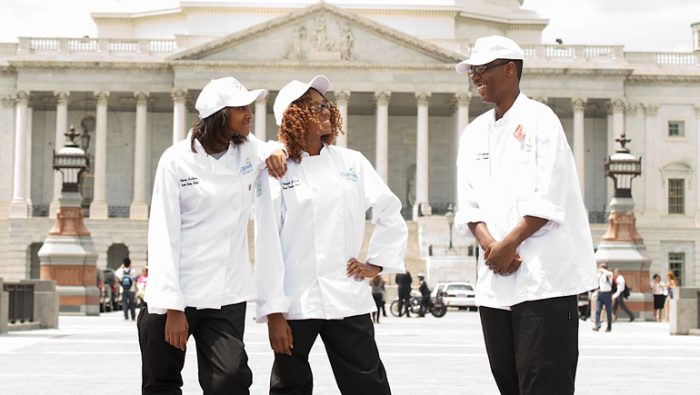 Here’s the good news: School meals are more nutritious than ever, thanks to recently updated USDA nutritional standards that call for more fruits, vegetables and whole grains, and less fat and sugar.

The not-so-good news? Not only have school districts faced a number of challenges with implementing these new standards—from lack of appropriate facilities to limited product availability—but the students aren’t always interested in eating what the cafeterias are serving.

Over the summer, the United States Government Accountability Office (GAO) released a report about the first year during which the new nutritional standards for school meals were implemented. After visiting eight school districts and interviewing numerous school food service industry officials, the GAO found that the biggest challenge is student participation in school lunch, which decreased in the first year of the new regulations. In turn, the GAO recommended that the USDA modify the nutritional standards to appeal to students’ interests.

No one would argue that getting students on board with new food is an easy task, but it’s also the most important one. For students to participate in the school lunch program, we need to give them a chance to voice their opinions in the conversation about school food. And that’s where Cooking up Change, our annual national student cooking contest, comes into play. By challenging high school students to cook up healthy, delicious school lunches with the same real-life constraints that their schools’ culinary staffs face, we invite them to shed light on the situation and, at best, inspire us to serve better school lunches.

One of the most valuable contributions Cooking up Change students bring to the table is a fresh perspective, a key ingredient for creative success. In years past, some students have chosen to reinvent popular cultural or local staples, such as a Mexican street food-inspired corn salad and jalapeno-infused peaches. Last year’s winning entrée was a spicy, ground turkey and veggie pita sandwich. All of these dishes could easily be recreated by school food service. And guess what? More than 750,000 of these student-created meals have been served—and embraced by fellow students—in school cafeterias from coast to coast.

“We automatically think it’s hard to make a healthy meal into something you like without adding salt or a whole stick of butter,” says Tavarious, a student chef from Memphis. “You can make delicious, healthy food that students will want to eat. I think schools will pick up on that.”

Not only do these students express an interest in food that tastes good, but they care about their health, too. By getting into the kitchen, they understand the challenges and also the potential for change first-hand. Carlos, a student from last year’s champion Orange County team, told the audience at the national contest in DC that he wants to be a role model for his peers and effect change at his school and beyond. “It’s easier said than done to make the change to healthy food,” he says. “But if we keep insisting, people will see that we need this change in order to help our community.”

We all need to advocate for healthier school food, but let’s keep student voices at the forefront. Let’s hand over the microphone — and the healthy recipes — to the students at the table.