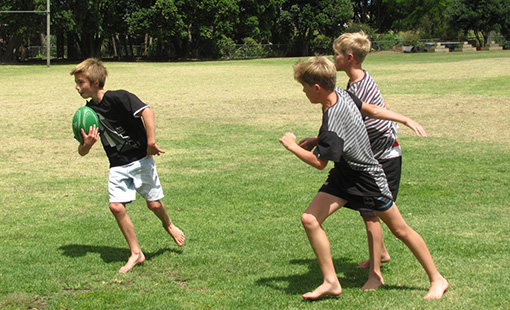 Growing up with a scrappy, daring, risk-taking national identity

Tara Kennon served as HSC’s communications manager before moving about a year ago to New Zealand’s Coromandel peninsula, where she is has focused on projects to promote travel in this region. Now, she’s reporting back to us on a few of her observations related to school wellness. Today, we’re sharing her first of two posts about physical activity in schools and the community.

Last year, New Zealand celebrated the 60th anniversary of the day that Sir Edmund Hillary and Tenzig Norgay became the first people to reach the summit of Mt. Everest. Hillary is a New Zealander and a hugely popular national hero. The occasion saw proud Kiwis around the world (even Antarctica!) paying tribute to Hillary’s achievement and brought new dialogue about his feats, including the 3-D documentary Beyond the Edge and an excellent exhibition at the Auckland museum.

As I started looking into the issue of physical activity in NZ schools, I found myself thinking about Hillary and what this national pride in his accomplishments — from his daring ascent of Everest to his subsequent years of trekking in Himalayan communities to support health and education projects — might say about cultural attitudes toward physical activity.

Every culture holds up various heroes in part to put a face on traits we value and pass on lessons for the next generation. The two accomplishments held up in the often-told Hillary stories, I realized, emphasize the same values that I saw in the way physical activity is approached in NZ schools: it’s good to take risks, and being active is a powerful way to build community and your own emotional health.

Be brave and take risks.

When I first moved to NZ, I was startled to see small children dangling from miniature zip lines on a playground or climbing trees outside a cafe. I was startled, too, by the number of adults I met who took part in what sounded to me like intense and slightly risky adventures sports, running marathons over mountains and kayaking for miles in the open sea. In a society that strikes me as otherwise quite safety-conscious (bike helmets and sun-protection hats are the norm), I quickly noticed that people seem to value a scrappy, daring, risk-taking national identity, particularly related to physical activity.

In some schools, this means kids running around and playing at recess without constant supervision, often with equipment that’s increasingly off-limits in the U.S. A recent story about an Auckland school that got rid of rules at recess made international headlines earlier this year (including a blog post in The Atlantic weighing in on the American context) but the school’s approach doesn’t actually strike me as too far from the norm here, especially outside of urban areas.

When I visited nearby Te Puru School, I was intrigued by an area of the schoolyard full of tall trees and monkey bars. Kids were swinging from branches, hanging upside down and in one case, building and climbing a tower of discarded tires.

“Kids get a lot of exercise over here,” said teacher Jayne Bolsover. “They’re really in the zone, they’re focused and confident. They won’t feel like that if I’m hovering there telling them to be careful. They’re deeply engaged in real creative play, and that’s essential for learning and development. I think it’s absolutely essential that they learn to take risks.”

This approach is reinforced by the existence of the ACC, a national public entity that covers anyone (even visiting tourists) injured in an accident in New Zealand. If you fall off the monkey bars or crash your kayak in New Zealand, you’ll get timely medical treatment and the ACC will pay for it. It also provides compensation for time away from work. The ACC virtually eliminates the risk of financial liability and litigation related to accidental injuries. This is a big deal, and creates a climate that makes it a lot easier to support a daring attitude.

Up next: Stay posted for more on an approach to physical activity that emphasizes its benefits for mental health and strengthening social connections.