Why Breakfast After the Bell Is Best 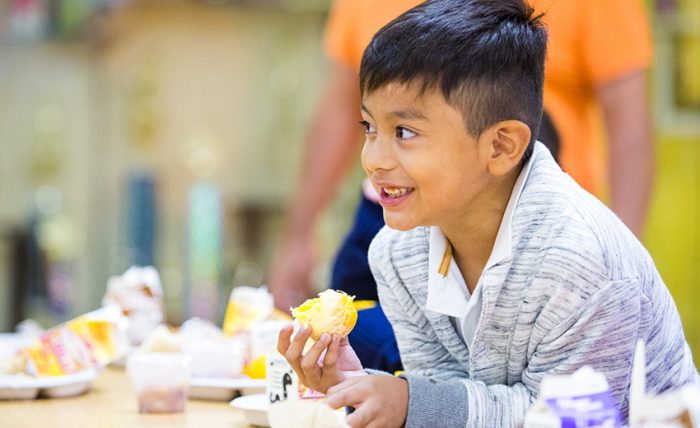 Every day in Chicago’s Brighton Park neighborhood on the city’s southwest side at Gunsaulus Scholastic Academy, students file into the school, pick up a free breakfast and head to the classroom as part of the school’s breakfast program. Breakfast in the classroom is a proven delivery model that serves breakfast during the first 10 minutes of the school day rather than before school.

Breakfast has a strong link to educational outcomes—even more so than other meals—because of the way the brain responds to food after the short fast during sleep. Principal Kim understands just how important breakfast is. “It’s clear that children who are well-nourished before they start the school day are able to focus better and able to participate in learning better than those than go hungry,” he says. “At the same time, poor nutrition can lead to the opposite of engagement—which is disengagement—to even behavioral issues and challenges.”

Breakfast is especially critical in schools located in low-income neighborhoods. At Gunsaulus, the student population is more than 92 percent Latino and 90 percent low-income. “We know that getting free access to breakfast is very helpful for our students,” says Kim. “That’s one fewer meal that the family would have to worry about paying for and preparing before sending their children off to school.”

Principal Kim views breakfast as one part of Gunsaulus’ holistic approach but says that attendance rates at the school have improved since introducing the breakfast program, from 96.4 percent attendance to 97.8 percent attendance last year. “Children like to come to a school where they feel cared for,” he says. “Knowing that there’s going to be a meal there also communicates that we value their wellbeing.”

CPS adopted a Breakfast After the Bell policy in 2017 that provides for all schools to serve breakfast after the start of the school day using several methods, including breakfast in the classroom. This and other breakfast initiatives over the years have lead to an increase in the number of CPS students getting breakfast, from 34 percent during the 2012-2013 school year, to 58.2 percent in the 2016-2017 school year, according to the Food Research and Action Center’s report, School Breakfast: Making it Work in Large School Districts, which analyzes 73 districts.

This is something Principal Kim has seen firsthand, but the grab and go model works best for Gunsaulus for a more practical reason, too. The school’s cafeteria only accommodates 180 students—nowhere near the school population of 800. “We could look at using some other spaces, but we would never be sure to have availability to give to all 800 students at one time,” he says.

Now that Gunsaulus has been doing breakfast for several years, it goes off without a hitch, says Kim. “It really works like clockwork when everybody is working together,” he says. Although there was some initial resistance from teachers who were worried about losing instructional time or dealing with a mess in the classroom, the teachers are now some of the program’s biggest advocates.

Breakfast is such an important meal, especially for students who might struggle to get a nutritious breakfast at home. Healthy Schools Campaign has always been an advocate for school breakfast and specifically for breakfast in the classroom and Breakfast After the Bell. We’re so encouraged to see how well this program is going at Gunsaulus and are excited to see schools across Chicago implement this effective breakfast model.