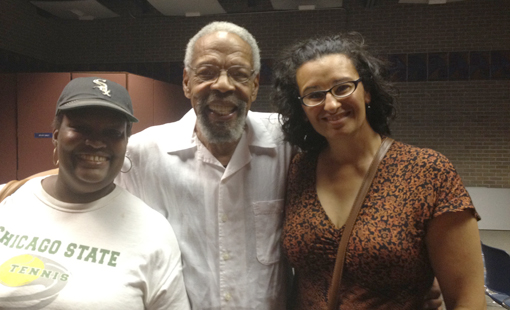 The neighborhood of Bronzeville, on Chicago’s South Side, is known for its history of dynamic changemakers. Important American activists and artists such as Ida B. Wells, Margaret Taylor-Burroughs and Gwendolyn Brooks once called the neighborhood home.

Parents are working to build health and wellness teams in their schools and ensure that their schools are implementing CPS’ new wellness policies. At a recent Parents United meeting concerning physical education (PE), Harris expressed interest in working to bring the district’s new 30/20/10 pilot program, in which students engage in 30 minutes of PE, 20 minutes of recess and 10 minutes of in-class physical activity every day, to schools in her neighborhood.

The parents and local residents who have joined the movement are no strangers to organizing and community action. In addition to serving on their local school councils, many are part of the Bronzeville Alliance, a neighborhood coalition dedicated to community betterment and social justice. Over the past three years, Johnnie Owens, an Alliance leader and veteran organizer, has been working with Parents United leaders to bridge communities and create a movement that extends across the whole city.

Parents United has roots in Chicago’s Latino community and has developed a strong Latino parent leadership base. The involvement of committed African-American parents and organizers like Owens represents an important progression for the Parents United movement through this bridging of communities.

“I hope that we can begin looking at a whole range of issues that require a coalition between African-American and Hispanic communities,” Owens says. “Together, we are the majority of the population in Chicago, and I think that as a result of that, we need to be more engaged politically in terms of directing resources to our community.”

These coalitions are forging Parents United as a movement where parents from all across Chicago advocate for change. As member Lorenzo Young puts it, “Parents United is a wonderful gathering of folks. We’re multi-dimensional in our ethnic backgrounds and the neighborhoods we represent. But, as different as we all are, the common thread is that we are united to make sure that our children’s educational experience is the best possible one it could be.”

We welcome new parents and schools to Parents United for Healthy Schools!

For information on the initiative or about its next quarterly parent meeting on October 18th, please contact Guillermo Gomez at ggomez@healthyschoolscampaign.org.

Previous
Proud of Local Chicken in Colorado Schools
Next
Cooking up Change Chicago is Just Around the Corner!