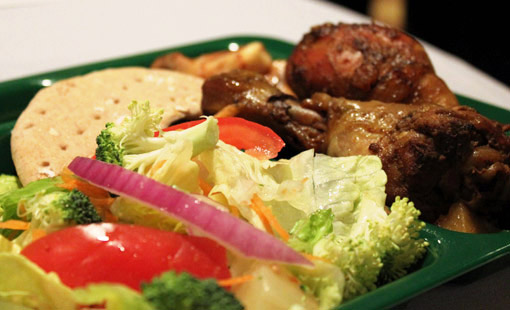 CVCA’s winning meal on the menu!

Last month, Chicago Public Schools (CPS) students across the city lined up for a very special lunch — one created by their peers. A team from Chicago Vocational Career Academy (CVCA) took first place in HSC’s Cooking up Change healthy cooking contest last November, and the students’ winning meal was served to the district’s 400,000 students on February 20.

“Kids love spicy food,” said Mallory M., a senior. “We wanted a meal that would make us feel more at home.”

Cooking up Change, now in its seventh year, is a healthy cooking contest that puts student voices front-and-center in the national dialogue about school food. Rochelle Davis, HSC president and CEO, said, “CVCA’s meal highlights the creativity that students can bring to this discussion.”

The CVCA students were celebrated at their school on February 20, where they cooked up the dish for a luncheon of 75 guests. Trevor Ferguson, Regional Vice-President at Aramark, and Cooking up Change’s Chicago Premier Sponsor and National School Nutrition Partner, said: “The students are the stars of this day. But it also is a day to highlight the positive impact that a healthy school lunch can bring to Chicago students and the importance of student involvement in menu planning.”

At the event, he said that because of his Jamaican roots, he especially appreciated the flavors — and knew his mother would be proud of them.

Leslie Fowler, Director of Nutrition Support Services at Chicago Public Schools was equally enthusiastic about the student-designed meal and Cooking up Change: “We are so excited to see the kids not only cooking, but to see them engaged in health and nutrition.”

As for the students themselves, Mallory summed it up: “We’re young, and our food is all around the school? That’s good.” And all of them agreed with team member Lina J., who said, simply, with a quiet smile, “We feel famous.”

Their culinary instructor David Fuller noted that there’s still a long way to go — their next stop is Washington, D.C., where they will compete against other Cooking up Change winners from across the country. They’ll spend about 5-10 hours a week outside of school, in addition to class time, to prepare.

Fuller said: “We’ll practice their speech, their presentation — and we’ll make sure they understand the opportunity they have to make change in school food.”

It’s much more than a competition, Fuller said: “They have the opportunity to go deeper into why they’re creating this recipe and how healthy school food affects themselves, their classmates — and ultimately when you compete nationally, you’re talking about kids in all schools. They have a chance to make their voice and opinions heard.”

After that? The sky’s the limit. Said David Blackmon, Program Coordinator, Hospitality, Culinary Arts, Agricultural Science, Transportation, Manufacturing and Logistics: “”These talented CVCA students are on an exciting path, not only to Washington but to bigger and better things after that. These are the chefs, food service directors, entrepreneurs and educators of tomorrow.”

Read about all winners from the Cooking up Change 2013-13 season.

Previous
A Small School With a Big Message About Green Cleaning
Next
Liliana Hernandez Addresses Health Disparities at Home, at School and Across CPS