Chicago Leads the Way in Farm to School Innovation 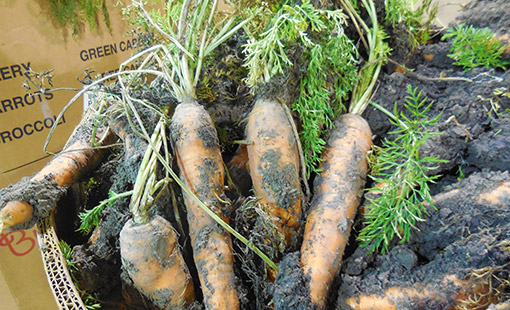 Chicago emerges as a leader as farm to school flourishes nationwide.

Carrots grown at Growing Power’s Milwaukee farm were large and so had to be diced in order to serve them to around 400,000 Chicago Public School students. Photo Credit: Linda Mallers, FarmLogix

In Chicago, farm to school efforts are especially strong. In fact, this month CPS served up 36,000 pounds of locally grown carrots harvested from Growing Power, a Milwaukee-based urban farm founded by former NBA player Will Allen. With those carrots, CPS received the largest fresh-food farm to school shipment in the U.S., according to the USDA.

Once the carrots harvested from Growing Power’s Milwaukee farm were diced, they were nearly ready to be served to Chicago Public School students. Photo Credit: Vegetable Fresh

In fall 2013, with that groundwork and more already laid, CPS and its food service vendor Aramark began procuring produce through FarmLogix. It’s an innovative online platform that connects farmers to big buyers such as schools, started by tech guru Linda Mallers of Evanston, Ill..

Buying local produce through FarmLogix allows CPS to leverage its purchasing power and buy in mass quantities from multiple small farmers. FarmLogix also tracks where produce is procured and even allows individual students to learn about the farmers who grew their food. That’s because FarmLogix worked with the district to develop the CPS Farm to School Market website, where students, teachers, parents and community members can “get to know” the farms and farmers who grow all that local goodness.

Plus, it shows the number of pounds purchased and the dollars spent by CPS on local foods and the USDA Fresh Fruit and Vegetable Program. Over the past three school years, CPS has purchased more than $4.2 million in produce from regional farmers. And in about four months, August 26 to December 31, 2013, CPS has already sourced $1.5 million of locally grown healthy foods for Chicago students.

So while students are getting their fresh veggies, small farmers are gaining access to new markets that keep them growing, too. It’s a win-win for students, farmers and CPS overall.

Mallers says: “We build bridges with food, and we use the internet to do it.”