Chicago Students Get Ready for Cooking up Change 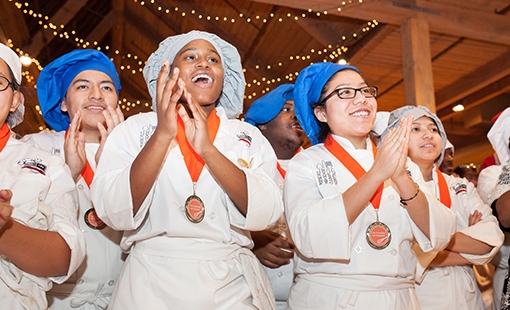 As you read this, culinary students across Chicago are working hard in their schools’ kitchens to craft school lunches that their peers would love to eat. The creations that come out of these kitchens are not your standard school lunches. Forget chicken nuggets and nachos; think Haitian-spiced chicken and roasted corn hash.

These talented culinary students aren’t just creating exciting meals that their peers would enjoy, they’re doing it while following strict nutrition and budgetary guidelines. This is no easy challenge. But year after year, the students competing in Healthy School Campaign’s Cooking up Change competition amaze us with their energy and ingenuity.

We launched Cooking up Change in 2007 to fill what we saw as a void in the national conversation about school food: the presence of student voices. Who knows what students want to eat better than students themselves? Since 2007, Chicago Public Schools (CPS) has instituted much higher nutrition standards and the USDA has revamped the nation’s school food program. Having higher standards is one thing. Students embracing healthier school food options is an entirely different thing. But the key ingredient today is the same as it was in 2007 — student voices.

With the help from culinary instructors and local chef mentors, Cooking up Change students engage in a weeks-long process where they create, test and revise their recipes until they’re just right. The Chicago program culminates with a citywide cook-off on October 29 at the Bridgeport Art Center, where the students’ hard work will be celebrated by hundreds of guests. A panel of the city’s leading chefs and food industry experts will judge the students’ creative meals.

This year, students have access to nutrition information for each of the ingredients, which allows them to track important things such as calories and sodium while creating their recipes. Each menu is carefully analyzed by dietitians to ensure that it meets the requirements, but this additional information allows the students to calculate as they experiment. It also adds to the experience because students are now thinking about nutrition information from the very start of the Cooking up Change menu planning process.

And the process allows students to produce some seriously good food. If you’re in Chicago, please join us on October 29 to witness these talented young chefs in action and to taste their delicious meals. All proceeds from the event go toward our mission to improve school and student health in Chicago and across the country. If you are from outside of Chicago or cannot attend, you can make a donation or enter the grand raffle.

The competition in Chicago is just the beginning of an incredible nationwide contest. The winning team from Chicago will join other winning teams from across the country when they compete at the Cooking up Change National Finals in Washington, D.C., next June. We’ll announce the full Cooking up Change 2015-2016 schedule soon!