Congratulations to the Winning Student Chefs in Little Rock! 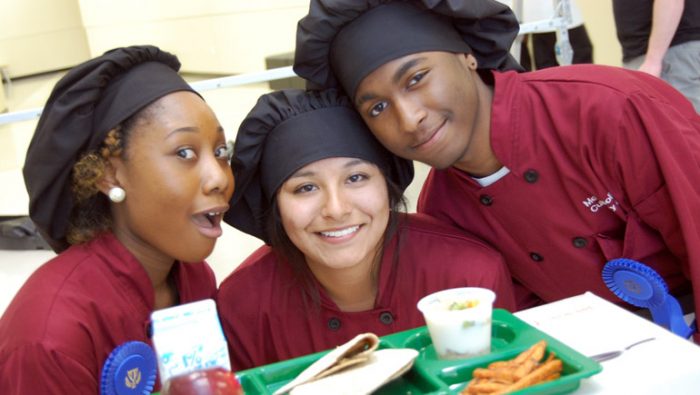 Cooking up Change competitions are happening all across the country this spring, with winners heading to Washington, D.C. for the national finals in June! HSC’s Cooking up Change contest challenges high school culinary students to create a healthful and delicious school meal that can be served in a school cafeteria. Cooking up Change is not only fun and educational, it adds student voices to the national conversation about school food. Here’s a profile of one winning team.

Competing in Cooking up Change for the first time, Little Rock, Ark. students from Metropolitan Career-Technical Center crafted new recipes and worked to serve up a healthy school meal that their peers would enjoy. Students Jason M., Tanya T. and Elissa G. created the winning meal, a chicken flatbread sandwich with swiss cheese, garlic, onion and black pepper, served with sweet potato fries sprinkled with cinnamon and a yogurt parfait with kiwi, tangerine, apple and pear.

Although the team’s students hail from different high schools, they all attend the culinary arts program at Metropolitan Career-Technical Center. Their close-knit team developed the recipe after a few false starts. They ditched their initial concept, a turkey sandwich, and Tanya T. envisioned the chicken flatbread idea.

Jason says that even then, obstacles to greatness remained. “We changed up the whole meal and then added a lot more ingredients such as the onions and Italian seasoning,” he said. “And still it didn’t taste that great!”

“It wasn’t the most amazing thing ever,” Elissa agreed.

“At first, it looked like a burrito,” Jason admitted.

Practice makes perfect, though. They tried a variety of folding techniques until their perfectly folded and deliciously seasoned creation was ready for the judges, which included the district superintendent and the state child nutrition director.

About those judges: Jason was convinced that a little charm helped turn the tide in their favor. He said, “When we were preparing the food, I told my team that we should make as many friends as possible. I was just going around waving at judges and talking to them. It was a charisma factor, I guess.”

For Elissa, the win was unexpected and exhilarating. “I’m just thankful,” she said. “We really came in not expecting to win. And when we did, it was just shocking. It was a great experience.”

By participating in Cooking up Change, she’s pursuing a lifelong love of cooking. “Since I was little I would watch my mom and grandma cooking, and it made me feel happy,” she said. “I just want to make people feel happy with my food.”

Jason’s journey was similarly fueled by family. “My mom worked in some kind of kitchen when I was younger, and I just loved her cooking,” he said.

What’s next for the team? The district will serve the winning meal to 5,500 students in April. After that, they’re heading to Washington, D.C. for the national finals, where they will add their voices to the national dialogue about school food.

It’s so crucial that students join the conversation, Elissa said. She notes that for herself and her peers, lunch “might be the only meal we get during eight hours. It’s important that the flavors are right and that we like it. It’s a big deal.”

Learn more about Cooking up Change.

Read about all winners from the Cooking up Change 2013-14 season.

Previous
Silver Nanotechnology Might Be Hot, but is it Healthy?
Next
Engaging Parents in School Wellness: Communication Is Key