Cooking up a Healthy Moroccan Meal in Orange County 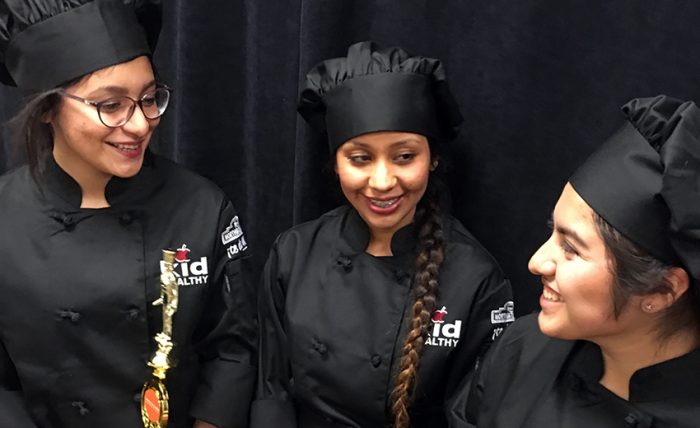 When the culinary team from Valley High School in Orange County thought about what they wanted to make for the Cooking up Change competition, they knew they wanted to think outside the box—and into a zucchini.

But a zucchini wasn’t the first vegetable they tried. “We first started with a bell pepper,” says Rosa. “And then we thought, ‘Why not zuchinni?’” The flavor of the zucchini worked well with the spices, so the team stuck with it.

Zucchini wasn’t the only ingredient the team went back and forth on. They knew they wanted to add a bit of sweetness to the dish and found that raisins had been on the ingredient list in the past, but the team found out that they were no longer able to use raisins. Teams are limited to commonly available school food service ingredients and equipment when creating their dishes. When the team tried sweet potatoes, the flavor was a great compliment to the overall dish.

But the team was thinking about more than just ingredient lists and flavor; they also wanted to make sure their peers would enjoy the meal. “When we were creating this dish, we thought about how many students just throw their food away,” says Rosa. “We really thought about, will they eat this and not throw it away. We were really into the competition because we really want to change school food.”

When the team tested their meal in peer taste tests, everyone loved it. “All we got was positive feedback,” says Mariah. “People kept asking us when it’s going to be put on the school menu.”

Although the team would love to win in D.C., they’re taking a big picture view of the whole trip. “Either way, if we win or lose, it’s all about the experience,” says Rosa. “We’ve learned and grown so much along the way, it’s just not about the win.”

Congratulations to the winning Orange County team—and all the Orange County student chefs—for proving that school meals can be healthy and delicious!

The Orange County contest took place on April 21 with support from local nonprofit Kid Healthy. Here are all the teams that competed: