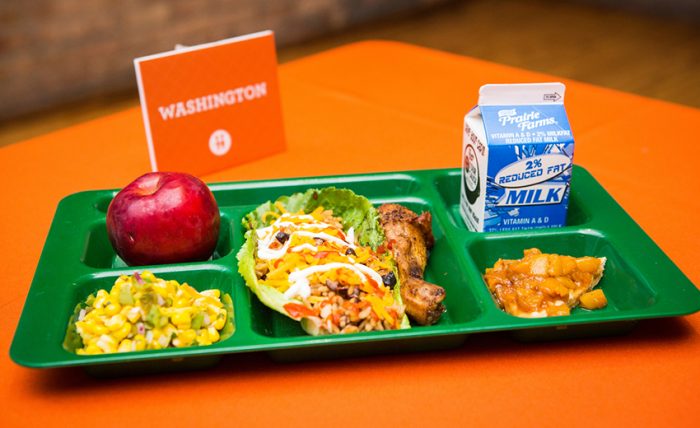 Ever wish you could try the winning dishes from Cooking up Change? Well, here’s your chance. Each month, we’ll share a Cooking up Change recipe so you can try the meal at home and taste firsthand how these students are changing the future of school food.

Healthy Schools Campaign’s Cooking up Change contest challenges high school culinary students to create a healthy and delicious school meal that can be served in a school cafeteria. Cooking up Change is not only fun and educational, it also adds student voices to the national conversation about school food. Through Cooking up Change, these young chefs do more than sharpen their culinary skills; they develop leadership, public speaking and team building skills and create relationships and networks that will last a lifetime.

Today, we present the main dish from the 2015 Cooking up Change Chicago winners.

When the culinary student team from Washington High School first thought about their recipe, they wanted to make a burrito bowl. In order to make it a healthier dish that followed the nutritional guidelines of the school meal program—and the Cooking up Change contest—they substituted the tortilla for lettuce and the white rice with brown rice.

Another challenge the team ran into was not being able to add salt to the dish. “It was difficult to make a dish that had some type of salt in it,” student chef Natalie says. “We wanted to use other types of ingredients to substitute for the salt which was where the chicken base and Cajun seasoning came in.”

Washington was the first high school to present on the day of the competition, and their nerves were front and center. “I was nervous and excited,” says Natalie. “It was the first time I was ever in a competition; I was nervous because of that. But I was excited because I was confident in what we were presenting.”

And that confidence paid off. Right before the announcement of the first place team, student chef Neidy thought, “Either we win this or we don’t win anything at all.” The team from Washington emerged the winner, and their excitement shone through on the stage as they accepted their award.

The team will now practice their recipe and presentation as they prepare for the national finals in Washington, D.C. But the team will also be busy serving their meal to friends and supporters the same day it is served in all Chicago Public Schools cafeterias in February and presenting to the Chicago Board of Education and others. You can see their TV appearances on FOX TV and WGN TV.