Cooking up Change Chefs Take Their Message To Capitol Hill 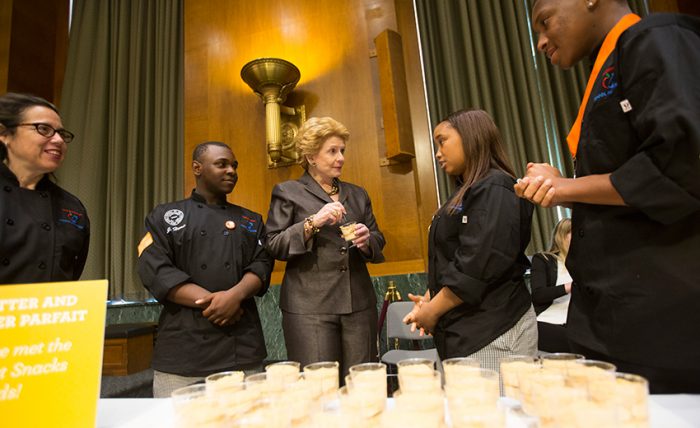 Ten teams of talented student chefs spent a few days with Healthy Schools Campaign in Washington, D.C., last week. On Monday, those teams competed in the Cooking up Change National Finals, where the team from Orange County took first place with their menu of Moroccan Stuffed Zucchini, Moroccan Salad and Spiced Pear Cups.

But Cooking up Change is about much more than crowning a national champion; it’s about elevating student voices in the national conversation about school food. In addition to the cooking competition, these student chefs took their message to Congress.

Sen. Debbie Stabenow, a Democrat from Michigan, and Sen. Pat Roberts, a Republican from Kansas, co-hosted a Senate tasting event with the Cooking up Change teams on Wednesday. These two senators have been working together to reauthorize the Child Nutrition Act and created a bipartisan version of the bill that passed out of the Senate Agriculture Committee earlier this year.

At the Senate tasting event, more than 168 attendees—including staff members from more than 20 Senate offices—were able to taste the students’ meals and talk to them about their experiences creating healthy school meals. These conversations are so important as we look toward a new Child Nutrition Act which is currently a topic of debate in the House. These student chefs show us all that within the constraints that schools face every day, it is possible to create healthy meals that appeal to students using whole grains, low-sodium and plentiful fruits and vegetables.

In addition to the Senate tasting event, teams also had individual meetings with their senators, representatives and congressional staff members to share their inspirational messages and speak about the importance of healthy school food. Cooking up Change student chefs met with seven senators, one representative and the staff members of eight senators.

When so much of what we hear about school food focuses on challenges, these students remind us to focus on solutions and to not waver in our support for healthy school food. The student-designed meals from Cooking up Change have been added to school menus across the country, including the districts where they were created. This is a testament to the students’ skills in creating recipes that meet real-life constraints, and their ability to dream up healthy meals that their peers enjoy. We hope members of Congress take this message to heart as they look forward to the reauthorization of the Child Nutrition Act.

Many thanks to The Pew Charitable Trusts for helping us bring these amazing students to Washington, D.C., for partnering with us to host the Senate tasting event and for facilitating the meetings on Capitol Hill. Thanks, too, to all of our Cooking up Change sponsors: National School Nutrition Partner, Aramark; Official Culinary Partner, the James Beard Foundation; Official Travel Partner, Southwest Airlines; and Silver Sponsor, the American Federation of Teachers. 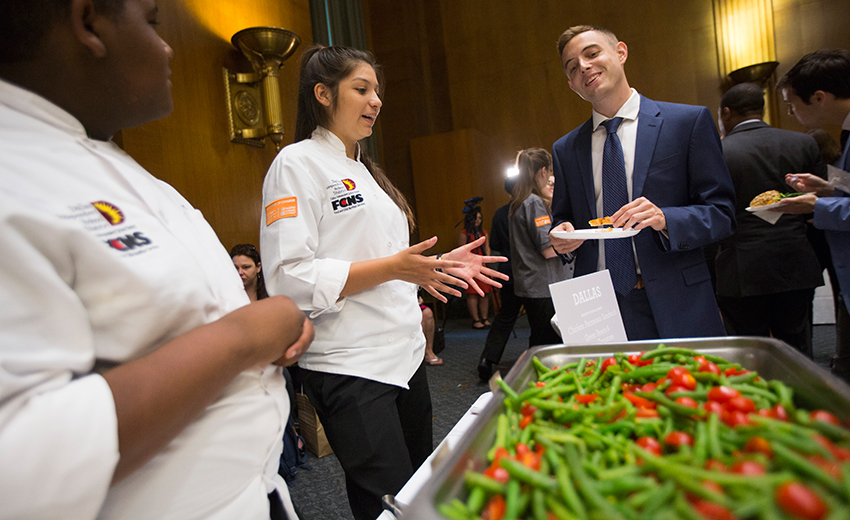 Previous
On the Ground: ESSA in Action
Next
How Healthy Schools Campaign Supports Farm to School