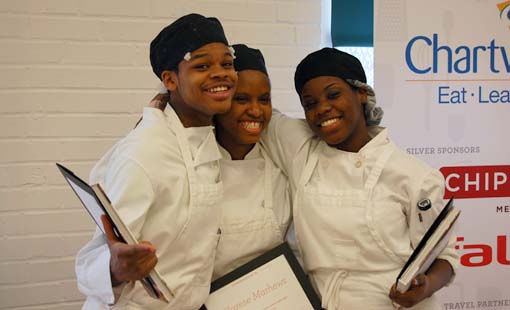 In St. Louis last Tuesday, the crowd at the city’s first-ever Cooking up Change competition was treated to quite a meal. Student chefs from six teams representing two St. Louis high schools sliced, diced and delicately arranged enticing dishes, each vying for the top spot.

In St. Louis last Tuesday, the crowd at the city’s first-ever Cooking up Change competition was treated to quite a meal. Student chefs from six teams representing two St. Louis high schools sliced, diced and delicately arranged enticing dishes, each vying for the top spot.

The victors: Aretha Brown, Clarese Mathews and William Viney, three culinary students from Beaumont Career and Technical Education High School, who won with their delicious meal of barbecued baked chicken, sauteed broccoli and carrots and a dessert of poached pears.

Brown said the team chose their dish as a way to take a popular and easy-to-prepare meal and make it healthy. Added her teammate, Mathews, “I know children love a lot of meat. The most common meat is chicken, so we figured, why not do baked barbecued chicken?”

The student chefs first developed a passion for cooking from watching their families and learning hands-on. Their mentor in the culinary program told them about Cooking up Change and piqued their interest. “I thought, ‘It’s gonna be fun, we’re not going to win, but it’s going to be fun,’” Brown said. “We were practicing and practicing, and then we started feeling confident.”

The teams worked together to create recipes, going back and forth with ideas, but ultimately chose their meal based on their ability to execute it well. At the competition, even with nerves running high, they made sure to stay focused. Mathews says: “My team stayed confident throughout the competition and helped each other. I enjoyed the teamwork and helping out other people.”

Student chefs from five other teams from two St. Louis Public Schools participated in the city’s Cooking up Change competition, and all of them did a fantastic job. Three cheers for the following students for representing their schools and their city:

But it was Beaumont’s winning team, which called itself the “Junior Chefs”, that took the day.

The Junior Chefs team was still buzzing with excitement when HSC spoke with them. Mathews and Brown said they both reacted with tears of joy. Brown says: “We’re an inner city school and people expect us to be underdogs. When we won, I was so shocked, but in a good way.”

The team from Beaumont will join winning teams from Chicago, Los Angeles, Orange County (CA), Denver, Jacksonville, Winston-Salem, Memphis and Washington D.C. in the national Cooking up Change competition at the U.S. Department of Education on June 10th. In addition to the trip to D.C., students win cookware, knife sets and culinary scholarships.

Mathews says. “I hope the judges in D.C. see that we really are trying to change America’s lunch menu.”

Congratulations, winners! We can’t wait to see you again in D.C.!