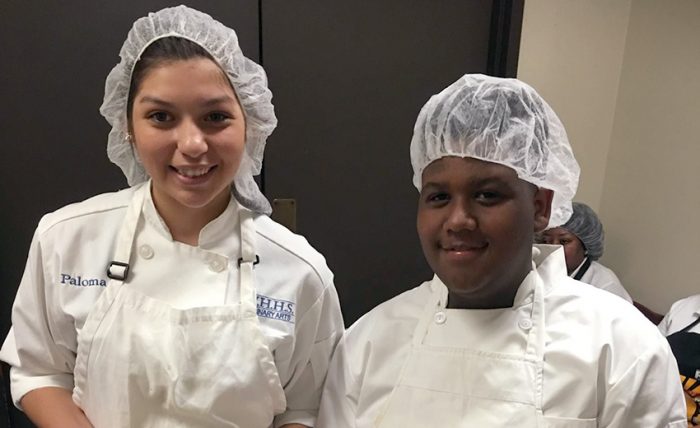 Probably not. But that’s exactly what the culinary team from Wilmer Hutchins High School in Dallas was going for. “We wanted to make something delicious that doesn’t seem like school food,” Jeremy said.

The student culinary team of Jeremy and Paloma won our Cooking up Change Dallas competition earlier this month with their Chicken Parmesan Sandwich, Green Beans with Cherry Tomatoes and Banana Dip Bites. Eight teams from Dallas Independent School District participated in the contest, hosted locally by Dallas ISD Nutrition Services. Both the first and second place meals will be served to the district’s 160,000 students.

Creating such a decadent sandwich under the confines of the school meal nutrition standards wasn’t without its challenges. Not using salt was a big challenge, but the team was able to swap the extra sodium for Italian seasoning.

Both Jeremy and Paloma learned how to cook through their school’s culinary program, but also at home. Paloma’s family is from Argentina, and she’s learned family recipes. Jeremy’s mother is a chef, and he’s been in the kitchen his whole life.

The Cooking up Change contest gave the pair insight into just how much works goes into creating the meals served in school cafeterias. “We learned that it’s not hard to create a healthy dish—but it’s not easy either,” Jeremy said.

Jeremy and Paloma will travel to Washington, D.C., to compete against nine other teams in the Cooking up Change national finals. They’re both excited about their first trip to D.C. and to taste the inventive cuisine from student chefs around the country.

Congratulations to the winning Dallas team—and all the Dallas student chefs—for proving that school meals can be healthy and delicious!

Here are all the teams that competed in Dallas:

Menu: The Bird, The Fiesta and The Nest
Bryan Adams High School

Menu: Krispie Baked Drumsticks, Southern Collard Greens and Yummy Banana Pudding
This great contest got a lot of media coverage. Check it out: