Engaging Students in the Outdoors With Tucson’s Peace Garden 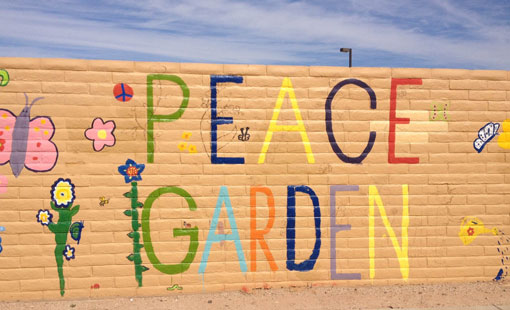 A Peace Garden project in Tuscon, Arizona gives students the opportunity to plant a community garden while encouraging them to be physically active.

Today, HSC Intern Angela Armijo shares a personal story about her time visiting the Peace Garden in Tucson, Arizona, a great community resource dedicated to encouraging children in the community to stay healthy and active by engaging with nature.

When I was young, my Dad would dedicate every Saturday to yard work during the warm summer months, so I was unwillingly up early on the weekend to help him with his weekly projects. But some children in my favorite Arizona town of Tucson get an appealing reward for helping with yard work — they get their bike fixed for free so they can ride to local community parks, stores and recreation centers. I was fortunate enough to be a part of this unique strategy of giving students the opportunity to plant a community garden while also encouraging them to be physically active.

A little background: As a Master’s student at the Mel and Enid Zuckerman College of Public Health at the University of Arizona, I took a course that connects a group of students with a community-based project and charges them with going through the necessary program and grant application tasks.  My project was a federally funded Racial and Ethnic Approaches to Community Health (REACH) grant project under the Centers for Disease Control and Prevention. My group called our project the “Safe Family Bicycling Project,” which aimed to advocate for the creation of a safe bicycling environment in Southside Tucson neighborhoods: Barrio Nopal, Elvira and Sunnyside.

The Southside Tucson neighborhoods, located in Pima County, Arizona, are underserved, low-income, Spanish-speaking, and Hispanic communities. These communities have inadequate safe-bicycling infrastructure, and a comparatively low prevalence for using bikes for active transportation and physical activity.

One of the first community stakeholders we identified was Beki Quintero, President of the Sunnyside Neighborhood Association. Beki is a passionate community organizer who recognized that children in her neighborhood were exposed to violence, vandalism and a lack of exercise and clean parks to play in. Beki started out by rallying children in the community on weekends to paint over vandalism to beautify their community, but this wasn’t enough. Beki wanted to give the children something in the community they could call their own. She also noticed the lack of physical activity, and asked the kids why they weren’t riding their bikes around town and to parks. They told her that their bikes were simply broken and they didn’t know how to fix them.

Beki decided to multi-task and create the Peace Garden, which created an environment for children to be in “partnership with nature, seeking to build a strong foundation with the environment,” while “discouraging criminal activity among youth.” The Peace Garden works like this: in exchange for a few hours of work on Saturday mornings once a month, children can bring their bikes to get tuned up or repaired and can ride that day. The Peace Garden is a safe space for kids to learn about the joys of gardening and sustainability while also promoting community advocacy and physical activity. The garden was created on little to no money, but instead from a community member determined to make a difference.

On Saturday mornings, Beki takes her truck and picks up the kids and their bikes to get started on work in the garden. On my visits to the Peace Garden, children spent their time on multiple tasks: pulling weeds in the vegetable boxes, having a healthy snack together, running over the ‘Bridge of Love,’ or spending time with Rick Quintero, Beki’s husband, who apprentices students to learn how to fix bikes. After the work is done, Beki lets the children enjoy the open space and run freely, exploring new plants that have grown or taking their newly fixed bikes out for a spin.

The students who first built the Peace Garden have grown up and moved on, but a new generation continues to flourish and make their community something they can be proud of. Children not only learn about new vegetables and how to plant them, how to maintain a garden and fix a bike, but they learn how to work together with their peers and are a part of something much bigger than themselves.

The Peace Garden was so successful that Beki decided to write a children’s book about kids’ experiences in the Peace Garden. “In the Peace Garden” proceeds went to Project Restore, a local Tucson nonprofit that seeks to make more community gardens just like the Peace Garden. A few more gardens were created around Tucson, and after visiting the original Peace Garden, a team began growing one in Israel! Beki has said that the Peace Garden serves many purposes, as children are learning about themselves, their community and nature by simply spending time working in the garden. And having a usable bike doesn’t hurt, either!

Healthy Schools Campaign supports initiatives that encourage children to be physically active. Read some of our blog posts related to physical fitness.