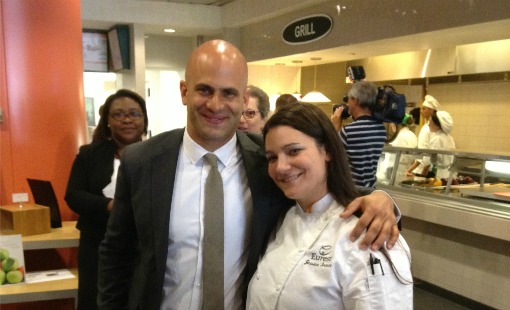 During last year’s Cooking up Change National Finals, Jessica Ivascu was literally in the heat of the competition. She was in the kitchen helping student chefs create their meals for the contest. “In the beginning, the kids were a little bit nervous,” she said. “They were excited to jump in and start producing the recipes that they had planned all year. Once they started, they all took off.”

Ivascu works at Eurest, a sponsor of Cooking up Change and the food service provider at the U.S. Department of Education (DOE). Ivascu serves as the food service director there. As part of the sponsorship, Eurest provides the food and labor for the food served at the reception following the contest.

The lessons she learned from the competition spilled over into her cooking at the DOE. Ivascu was able to offer several dishes from last year’s Cooking up Change competition in the DOE cafeteria throughout the year. One of the favorites was the Buffalo Mac and Cheese from Wichita’s team — which was a healthier version using whole wheat pasta.

Not only did Ivascu serve several dishes, she also included information about the recipe and the Cooking up Change competition at the checkout area so diners could read all about it. Next year, she hopes to pass out recipe cards. “Serving the dishes shows people that these high school age kids are able to take these foods that people wouldn’t think would be delicious and turn them into delicious recipes.”

Ivascu says she’s already been able to look through some of the winning recipes, and is excited to not only work with the student chefs, but to try her hand at preparing the recipes for the reception.