Extending the Classroom with a School Garden 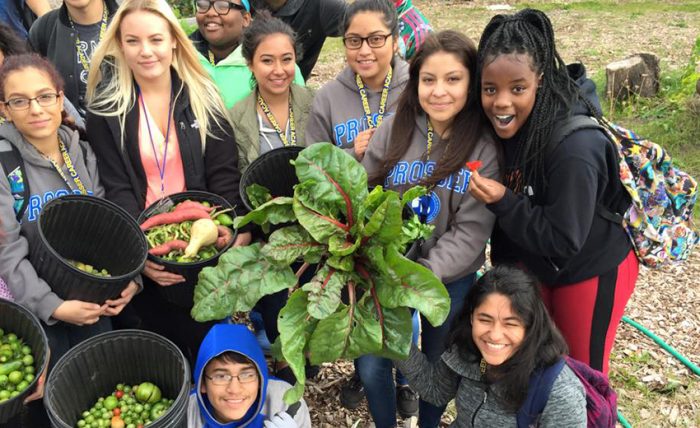 School gardens can be a great place to strengthen learning goals and create a healthy school culture. Learning in all core subject areas can be enhanced by anchoring projects to the garden and its cycle. And a garden is a natural place for nutrition education.

Getting a school garden at Prosser Career Academy High School in Chicago’s Belmont Cragin neighborhood wasn’t the easiest undertaking for Marnie Weir, a biology teacher at the school, but once the garden opened, she and other teachers have made great use of it.

The garden is situated on land that used to be a soccer field, complete with an underground irrigation system. Weir applied for and received several grants that helped fix the irrigation system and install raised beds.

In spring 2014, 200 people from the community came to help shovel dirt into the raised beds. And it’s truly a community garden, which was important to the garden team at Prosser. The garden has 14 raised beds—nine of which are used by the community.

In summer 2015, summer school students built a clay oven. That’s just one of the examples of how the school has worked hard to get the students involved. “Every single structure in that place has been built by students so they have a lot of buy-in,” Weir says.

Weir is excited to have the garden—an extension of her classroom. One experiment she did with her honors biology class was to test different ways to grow sweet potatoes. The class used “slips,” or sprouts from full-grown sweet potatoes, and tested growing them in sand, soil and water. With the garden, Weir can now extend this experiment to transplant the sprouts to the garden.

The class harvested the potatoes in November. “This is something I’ve fantasized about for years,” she says. The potatoes then went to the culinary arts department, where student chefs prepared them. Both classes walked across the park to Hanson Park Elementary School, where first grade students were treated to a snack and a nutrition education lesson.

Outside of her classroom, the garden also supports an ecology club, where the students learn about where their food comes from and how access to nutritious food is a social justice issue. “We’re hitting the issues of health and nutrition from a lot of different angles,” Weir says. “Anyone teaching high school knows if you don’t reach a high school student where they are, they aren’t going to have any reason to understand the material.”

Prosser also competes in our Cooking up Change program which puts student voices front and center in our city’s conversation about school food, challenging them to create healthy school lunches that their peers will enjoy while adhering to strict nutrition guidelines, ingredient lists and budget constraints. This year’s competition is coming up on Nov. 17.

Previous
More Certification, Less Chemicals at Montgomery College
Next
Why Smart Snacks Are So Sneaky