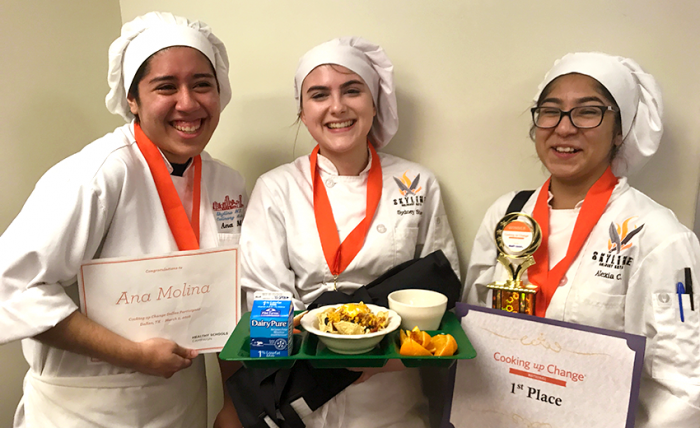 Student chefs Alexia, Ana and Sydney all remember cooking with their grandmas from very young ages. Those early lessons inspired the team’s entry in the Cooking up Change Dallas competition on March 2. Their menu of Tejano Fiesta Bowl, Roasted Broccoli and Slice of Spice won first place in that contest, which was hosted by Dallas Independent School District.

Once they had their inspiration, the team had make sure the meal was healthy and met the guidelines, including calorie counts, price restrictions and sodium levels. “It was definitely challenging to work with the strict nutritional guidelines and the $1.40 price range,” Ana says. But the team overcame those challenges through “sheer determination and sitting down and talking about any changes that needed to be made to the recipe. This includes making the recipe multiple times.”

Sydney says the team also used a lot of teamwork and patience to make sure that everything was exactly right with their recipe. And it paid off!

The winning team from Dallas will join other teams from across the country at the Cooking up Change national finals in Washington, D.C., in June. Healthy Schools Campaign’s Cooking up Change contest challenges high school culinary students to create healthy, great-tasting meals that meet the real-life requirements of the national school meal program. Cooking up Change serves up life-changing opportunities, helps students realize their own potential and puts student voices front and center in the national dialogue about school food. We’d like to thank our national sponsors: Diamond Supporter Newman’s Own Foundation and Official Travel Partner Southwest.