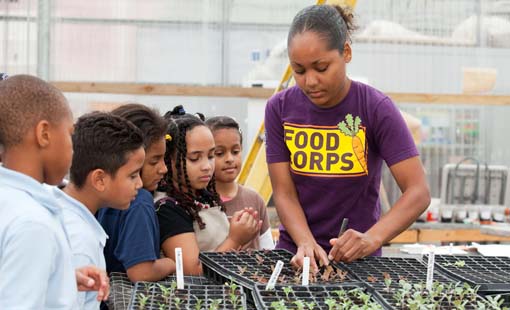 The movement for healthy school food has picked up major momentum over the past decade — there’s even a whole nationwide team devoted to public service around school food. Think of it like the Peace Corps, but the mission is close to home, fueling the minds and bodies of our nation’s students with healthy, nutritious school food.

Food Corps is a nationwide team of leaders that connects kids to real food and helps them grow up healthy. Food Corps members serve all over the country, teaching about healthy food, working in school gardens and bringing local food into school cafeterias. Members serve for a year of paid public service in one of fifteen states — with more locations coming soon.

Founded in 2009, Food Corps’ team has been supported by an array of institutional partners, particularly AmeriCorps. (Watch a TEDx Manhattan talk about Food Corps’s founding and values here). Even at this early stage, its impact is real. Co-founder Curt Ellis recently announced that “since September, our current crop of 125 service members has reached over 55,000 kids around the country, introducing them to kale and purple carrots, bringing them out into the garden to grow and harvest, and giving them a shot at a healthier future.”

Would you or someone you know make a good Food Corps member? Applications for new 2014-15 members are now open. Learn more here. Applications close March 30.

Read our profile of corps member Amoreena Treff to learn more about how Food Corps and its mission is making a difference for healthy school food.