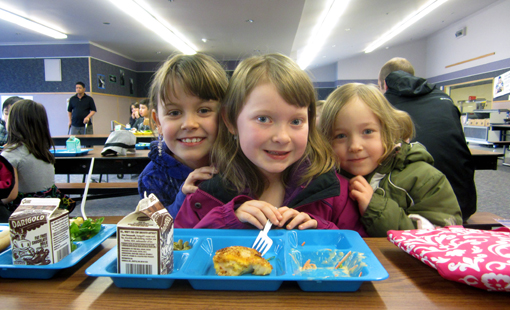 ““Before we had our lunch program, the lunches they got were frozen peanut butter and jelly sandwiches.”: Today we look at another community’s solution to locally sourced food — fish!

At HSC, we're always excited to bring you news of creative solutions to locally sourced school food. For example, in Chicago, chicken drumsticks from nearby farms have been on the menu. Here, we learn about how one community brings its bounty from the ocean to the lunchroom.

From coast to coast, schools are finding new challenges and unique solutions to bring fresh, healthy, local food to hungry students. For the schoolchildren of Sitka, a community of less than 9,000 on Alaska’s Baranof Island, one solution can be found all around them. Fish to Schools is a program that began as a brainstorm at an annual community health summit and became part of the local food revolution.

The Sitka Conservation Society has worked with local schools and local fishermen to bring fresh seafood to school lunch programs. Fishermen donate a portion of their catch to local schools, and processors freeze it. Organizers piloted the program during the 2011-2012 school year and have since seen an increase in frequency and numbers. The program serves the community’s elementary and middle schools as well as three high schools, including Mt. Edgecumbe Boarding School, a high school whose population is between 70% and 90% Alaskan native. Tracy Gagnon of the Sitka Conservation Society says local fishermen have been highly supportive of the program, and many have approached her saying, “If I would have known, I would have donated!”

Sarah Ferrency, who runs the fresh, from-scratch lunch program at Pacific High School in Sitka, says Alaska provides an interesting case because although the climate in the Sitka area is a resource-rich rainforest climate, the population relies so heavily on imported food.

“Before we had our lunch program, the lunches they got were frozen peanut butter and jelly sandwiches,” Ferrency says. “They would double the portions, but not very much food for growing teenagers. Fruit was Jell-O.”

She says even with the changes in nutritional regulations, much of the food has still been processed. But there has been a push for more of a return to foods indigenous to the area, including antioxidant-rich berries, seaweed and of course, wild fish. Southeastern Alaska is home to some of the most sustainable and well-managed fisheries in the country, and many locals rely heavily on fish for their income. There is also the cultural element–many residents are Alaskan natives, for whom fish is an essential dietary and cultural component.

“I talked to the manager of the local tribal youth center and brought up the perception that kids don’t like fish,” Ferrency says. “And he was personally offended. Of course kids eat them, he said. They eat them at home all the time. Some of it is honoring the people who have been here since time immemorial. They had it made here before we had food imported.”

As a teacher, Ferrency noticed changes as school lunch changed. Students, most of whom are on free or reduced lunch, started eating the food when the school started cooking. She said behavior drastically changed with the healthy options: there were less conflicts and students focused more on their schoolwork. And they were receptive to trying the fish itself, of course.

“Some of the students were surprised,” Ferrency says. “They would say, ‘this fish doesn’t smell at all.’ Even kids who were used to fishing were surprised at the quality of the fish, of the lack of those fishy off-flavors.”

Gagnon has heard this feedback as well, but interestingly enough, on the other end of the spectrum. Some of the Alaskan Native students who have participated in the program and are accustomed to fish prepared in certain ways, actually commented they would like to taste more of the fish as opposed to more seasoned incarnations. Gagnon says the team is planning on working with a Tlingit chef to try and incorporate more traditional dishes into menu planning.

As with many local food programs, education is a core component to what Ferrency’s team does as well as what the Sitka Conservation society does with Fish to School. Celebrity chef Rob Kinneen of Fresh 49 has worked with students on activities. A chef from the popular local dining establishment Ludvig’s Bistro showed students how to make salmon croquettes. Additional activities have included celebrations of local foods and fresh produce as a curriculum called Store Outside Your Door, where students go berry-picking and explore local food hands-on. Gagnon says the team has developed a stream-to-plate curriculum, working with third- and seventh-graders. Fishermen come to speak to classes, and the seventh-graders take a field trip to the harbor and tour different kinds of fishing boats.

“Next week, we’ll be gutting, filleting and smoking fish,” she says. “The following week, we’ll work with a chef and learn how to cook it. In addition to these focus areas, we talk about how it connects to culture, Native culture, nutrition and health, the food system and how this integrates into a local vs. industrial food system, why it’s beneficial to eat locally It’s all interwoven.”

To further the educational programming, staff facilitate a trivia game at every fish lunch to ensure students understand where their food comes from. Students even trace food miles to understand the scale of local vs. imported foods. The program reaches about 200 students every year through direct classroom programming, and about 1,500 have the option of choosing locally sourced seafood in both Sitka School District and Mount Edgecumbe.

Ferrency says her team is in the process of creating a model for other schools to adapt, and using Fish to School to teach nutrition and culinary arts and recently received approval for an AmeriCorps VISTA volunteer to work on developing that program. The idea of paying it forward is exciting, as many schools could learn and benefit from this innovative and successful program.

“I credit my community for taking it on,” Gagnon says.

Stay tuned to the School Food section of our blog as we spotlight other ways that locally sourced school food reaches our students!