Fueling Bodies and Minds with Breakfast in the Classroom 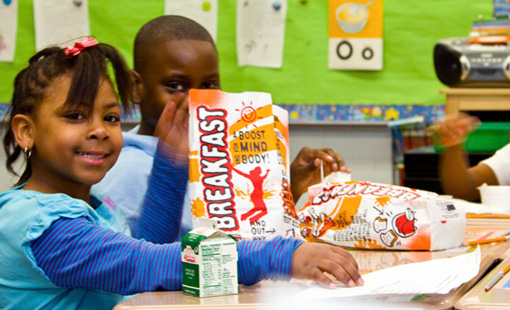 How Breakfast in the Classroom makes a big difference.

We’ve all heard that breakfast is the most important meal of the day. For students’ academic success, it’s not just important, it’s critical. Many Illinois schools have been using Breakfast in the Classroom programs to ensure that every student is well-fed and ready to learn, and nationwide support is only growing. A new joint report from the Food Research and Action Center and The National Association of Elementary School Principals Foundation shows that more than three in four principals would encourage their peers to consider instituting the Breakfast in the Classroom program.

Nationwide, the School Breakfast Program serves only half of low-income children who participate in the National School Lunch Program. Executive director of the Illinois Hunger Coalition, Diane Doherty, believes that Breakfast in the Classroom eliminates some of the barriers that prevent children from getting food in the morning, such as parents' work schedules and transportation. It also reduces the stigma some students feel in relation to getting breakfast separate from their peers.

Principals whose schools are participating in Breakfast in the Classroom noted an increase in breakfast participation, fewer reports of hunger among students, fewer children tardy and improved attentiveness in the classrooms. Not to mention, half of principals cited no challenges with starting up the program, and those who did said that the issues (such as limited janitorial staffing or concerns from teachers) were easily addressed.

The Chicago Public Schools (CPS) board adopted a policy in 2011 that brought Breakfast in the Classroom to all 472 elementary schools. CPS students now choose between a hot and cold breakfast option that meets nutrition recommendations established by the Harvard School of Public Health. Students can eat breakfast during the first ten minutes of the school day while attendance is being taken, morning announcements are being read or other activities are taking place. In some classrooms, teachers read a book to the class or students read quietly during breakfast. In other schools, teachers use these minutes to share nutrition education lessons.

CPS Principal Jose Luis Illanes says, because of breakfast in the classroom, “I can see that the children are more engaged.”

Learn more about why breakfast matters, particularly in CPS.

Find out about breakfast participation in your state!

Learn more about making universal breakfast work in your school, with this webinar tomorrow by Action for Healthy Kids.