Homestyle Cooking Is Winning Formula at Cooking up Change Troy 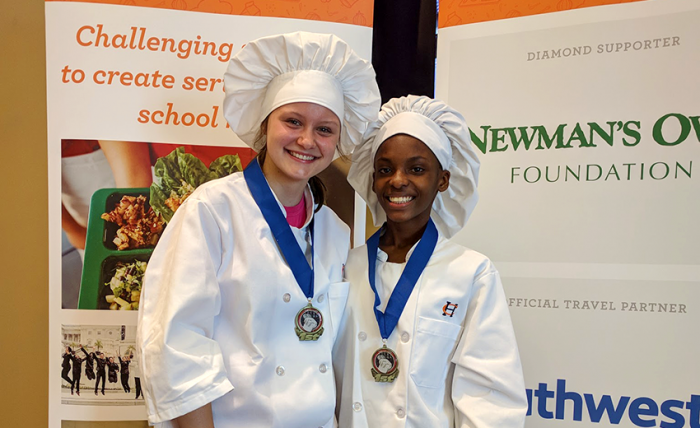 On March 13, we held the first ever Cooking up Change competition in Troy, Alabama, an hour from Montgomery. The competition was hosted by Troy City School District, and we were thrilled to have seven teams of talented culinary chefs compete for this first title.

Student chefs Rayvion and Jaleigh impressed the judges with their menu of Tuscan Chicken, Broccoli and Cheese Mashed Potatoes, and Apple Crisp. When the team found out they won, Jaleigh was very surprised. “We knew our dish was good, but didn’t know if it would be good enough,” she says.

To create their winning menu, Rayvion and Jaleigh wanted to create a comforting culinary experience for the judges—and for the students who would eventually eat the meal. “We felt like this was friendly family meal, and we wanted our classmates to feel at home,” says Rayvion.

Finding comfort in food is something Rayvion has been doing for years. “I started cooking full meals for my family at a very young age, and I always learned that food brought people together,” she says. Jaleigh, too, has been inspired by her mother’s skills in the kitchen and originally joined the culinary program to learn to be a better cook.

The team initially struggled with making sure their fruit dish fell within the calorie limits, so they went back to the drawing board for more ideas. They focused and discussed their options, says Rayvion. The final result? A delicious apple crisp.

The team from Troy will join other teams from across the country at the Cooking up Change national finals in Washington, D.C., in June. Healthy Schools Campaign’s Cooking up Change contest challenges high school culinary students to create healthy, great-tasting meals that meet the real-life requirements of the national school meal program. Cooking up Change serves up life-changing opportunities, helps students realize their own potential and puts student voices front and center in the national dialogue about school food.