Honoring Parents, Teachers and Principals at Change for Good 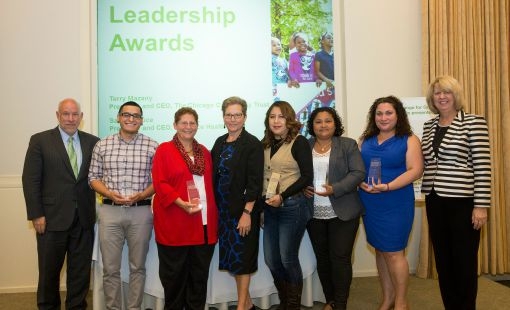 Our annual Change for Good Luncheon is an important opportunity to share a vision for the health and success of all Chicago students; gain an important national perspective; and hear about successes and challenges in transforming school food, student fitness, schoolyards and classrooms in Chicago.

Each and every day, there are parents, teachers and principals working hard to ensure these challenges are met and successes are possible. It’s with that in mind that we honored a parent, a parent/principal team, a teacher and a principal at our Change for Good Luncheon.

The 2015 Change for Good Leadership Awards were presented in honor of Sue Gin, last year’s Change for Good Luncheon chair and founder of Chicago-based Flying Food Group who passed away last September. Ms. Gin was a revered civic leader and entrepreneur who was tirelessly dedicated to the health and success of Chicago’s children.

Outstanding Parent Leader: Liliana Hernandez, Eli Whitney Elementary School
Liliana has been an active member of Parents United for Healthy Schools for more than seven years. Out of concern for high rates of obesity in her community, she organized and leads the wellness team at Eli Whitney Elementary School in Chicago’s South Lawndale neighborhood. As part of the Chicago Public Schools Recess Task Force, Liliana played a significant role in bringing back recess to elementary schools across the district. In her role as a wellness team leader and an active member of Parents United for Healthy Schools, she has successfully advocated for breakfast in the classroom, healthier school menus and helped collect more than 1,000 signatures in support of the district’s new PE policy. She also started an exercise club for other parents at her school, and has used the knowledge she’s gained through Parents United training programs to improve the health of her family and friends through regular exercise and healthy cooking at home.

Outstanding Principal/Parent Team: Jose Luis Illanes (Principal), Madero Elementary School, and Maria de Jesus Cristobal (Parent)
Principal Illanes has championed a number of healthy changes at Madero Middle School in Chicago’s Little Village neighborhood. He pioneered Breakfast in the Classroom long before it became a district mandate, and he understands the positive impact that healthy role models can have within the school and community. To that end, Principal Illanes has an open door policy at his school for parents and community organizations wishing to host health-promoting events and activities. One such activity is a healthy cooking class led by Maria de Jesus Cristobal, a local parent of two children who go to nearby McCormick Elementary School and a member of Parents United for Healthy Schools. Maria is an integral part of the McCormick wellness team, yet, thanks to the support of Principal Illanes, it’s at Madero where she convenes other neighborhood parents to share and promote healthy recipes and cooking tips. The group is often joined by Principal Madero himself. The two leaders share a strong belief that schools and parents must work together for children to truly embrace healthy practices.

Outstanding Teacher: Lori Klein Blazek, Jungman Elementary School
With 30 years of teaching experience in Chicago Public Schools, Lori Blazek views each new year as a chance to push herself to be more creative and to make lessons more engaging for her students. As a physical education teacher, she’s inspired countless students to lead healthier and more active lives. One way she’s been able to do that is through her leadership and participation in Healthy Schools Campaign’sFit to Learn professional development program, which helps teachers make health and wellness a regular part of the school and classroom experience. Lori’s experience and enthusiasm for teaching speaks for itself, but she’s also received numerous awards in recognition of her outstanding achievement and dedication to Chicago students, including: Illinois and CPS Elementary Physical Educator of the Year in 2012, CPS Exemplary Wellness Champion in 2015, and she’s a past president of the Illinois Association for Health, Physical Education, Recreation and Dance.

Outstanding Principal: Michael Beyer, Morrill Elementary School (former); Ogden International School (current)
During Principal Beyer’s tenure at Morrill Elementary School in the Chicago Lawn neighborhood, he led a concerted effort to transform the school grounds from what he has described as a “sea of broken asphalt” into an asset for the school and surrounding community. Not only were the school grounds not conducive for outdoor PE, recess and learning, but the neglected space was a magnet for gang activity during afterschool hours. Thanks to Beyer’s vision and leadership, Morrill received a $1.5 million schoolyard renovation at part of the Space to Grow: Greening Chicago Schoolyards initiative, which is co-managed by Healthy Schools Campaign and Openlands. Morrill’s new schoolyard debuted last fall featuring basketball courts, a turf athletic field, updated play equipment, vegetable and rain gardens, as well as permeable surfaces and underground water storage to help alleviate local flooding. Perhaps more importantly, the schoolyard has fulfilled Beyer’s vision of Morrill becoming a uniting and health-promoting space for students and community members alike.