Honoring Richards Student Chefs at the Chicago Board of Education 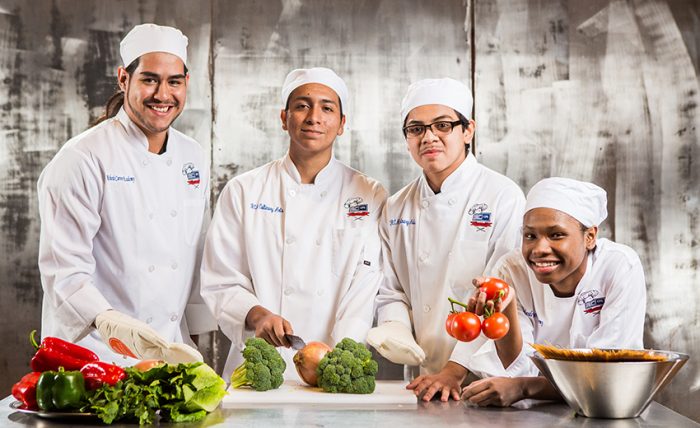 Creating seriously good school food is one part of the Cooking up Change competition, but the other is about putting student voices front and center in the conversation about school food.

The student chefs from Richards Career Academy got that chance last week when they were honored at the Chicago Board of Education meeting. Jeffrey Gonzalez spoke on behalf of the team and talked about the inspiration behind their menu: Vesuvio Chicken and Spaghetti, Chopped Caesar Salad and Carmelized Pear-pone.

Board members were engaged and commented on how good the meal has been in years past, how impressed they are and how excited they were to eat their meal that day.

In addition to being able to talk to the students, the Board tried the students’ meal during their closed session after the public meeting. Three Chicago Public Schools basketball teams were also being honored for their state championship titles, and those student athletes were able to try the winning Cooking up Change meal, too. The basketball players applauded the student chefs for their delicious meal.

This is just one of the opportunities the team from Richards Career Academy has to talk about their experiences with school food. In May, their meal will be served across the district and at a celebration lunch with elected officials and the community. The team will also serve their meal and present to the Illinois State Board of Education in May. The team is excited about these opportunities. “I’m excited to get this food out there and be heard,” said Gonzalez after the team won in November 2016.

It’s so important to hear from students in the conversation about school food. After all, it’s students that are eating the food. These student chefs teach us all to focus on the solutions rather than the challenges. And their meals have proven popular among students and have been featured on the CPS lunch menu. The fact that students enjoy these meals is a testament to the students’ skill in creating recipes under real-life constraints, and their ability to design healthy lunches that are popular with their peers.