Honoring Terry Mazany at the Change for Good Luncheon 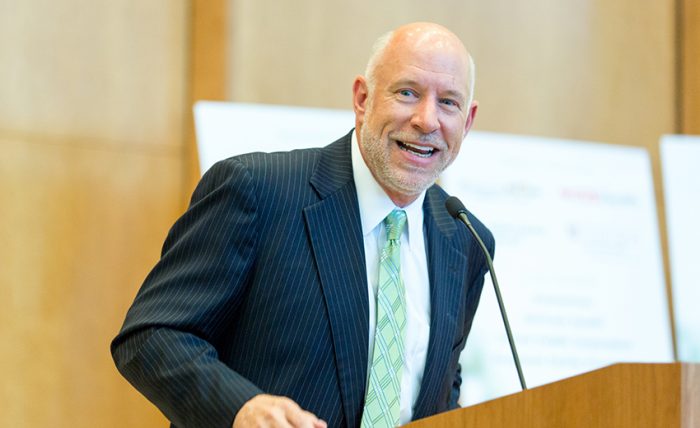 Over the past decade, we have been honored to work with Terry Mazany, the outgoing CEO of The Chicago Community Trust. Terry has served as the chair of Healthy Schools Campaign’s Civic + Business Advisory Committee and has been an invaluable partner in our work to make Chicago schools healthier places for all students. We’ll be recognizing Terry at our annual Change for Good Luncheon on Sept. 28 where we’ll present him with the Change for Good Leadership Award.

Since he took charge of the Chicago Community Trust 13 years ago, the Trust has doubled in size and more than tripled its grantmaking. In 2016, the Trust gave more than $229 million to more than 11,000 nonprofits. We’re honored to be among the recipients of these community grants.

As co-chair of our Civic and Business Advisory Committee, Terry was focused on the important work taking place at the intersection of health and education, and provided strategic advice on how we could deepen and expand our impact. He understands how important a child’s health is to their ability to grow and thrive and he always saw our work to make schools healthier places for all children as central to the health of our children, families, communities, city and region.

Before joining the Trust, Terry had leadership roles in school districts across the country. In 2011, Mazany served as the interim chief executive officer of Chicago Public Schools, and previously, he was a member of the board of directors of the Federal Reserve Bank of Chicago. We know he’ll continue to do great things for Chicago; he was just named as a board member of the newly formed nonprofit economic development corporation affiliated with the Obama Foundation.

I want to share something Terry said to the assembled crowd at our Change for Good Luncheon in 2016 about collective action. “You are an integral part of the work that we do every day, the work we do in Chicago and the work we do across the country,” he said. “It all comes back to our core belief: every student deserves to learn and thrive. And it’s our job—our responsibility—to ensure they will.”

We want to thank Terry for his work over the past 13 years and his longtime support of Healthy Schools Campaign. It’s truly been an honor to work together to ensure that all students can learn and thrive.