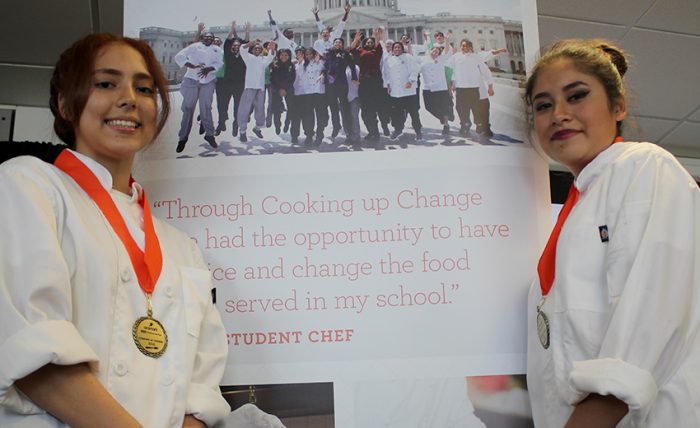 You know the old adage: Everyone likes chicken! Well that’s what Rocio and Lillian were banking on when they created their Chicken Philly Sandwich with sauteed onion, peppers and cheese. The winning team from Barbara Jordan High School got it right: It seems that everyone does like chicken! They paired their sandwich with a cucumber and onion salad and a yogurt parfait with a graham cracker crust and pineapples.

Approximately 150 guests attended the Cooking up Change Houston event on April 16, which was held at the Art Institute of Houston and sponsored by Aramark. Twenty-four students formed seven teams from four schools across the Houston Independent School District. They were tasked with creating a healthy and tasty meal with constraints such as a cost of only $1.40 per meal and no use of salt.

Rocio and Lillian were inspired by their favorite local sub shop to create their Chicken Philly Sandwich. Although they were faced with some challenges—there was a limit to the amount of steps they could take, and they wanted to add more vegetables but didn’t have the funds to do so—they enjoyed their time in the kitchen. “We were nervous at first,” said Rocio, “but then Lillian started singing and we were like ‘yeah, we can get used to this!’”

Rocio learned to cook from her mother who had a taco stand when Rocio was a girl. That love of cooking has inspired Rocio to continue cooking—she especially loves making pastries—and work in the culinary field after school.

Their win didn’t come easy: There were certainly hiccups along the way. “We realized something about the portions was off; we put too much apple juice in the yogurt. But we were able to fix the mistake and turn it into something people liked,” said Rocio.

Rocio and Lillian are thrilled to be able to go Washington, D.C., to compete in the national competition. They have been talking about it a lot and plan to try their hardest at the competition to make their hometown and high school proud. While Lillian has never been to the capital city, Rocio has, and is excited to return.

“We were really happy with our dish,” said Rocio. “We were eating it and eating it and everyone at school wanted to taste it, but there just wasn’t enough!”

Get a firsthand look at how Rocio and Lillian created their award-winning meal!

Here are all the teams that competed in Houston’s Cooking up Change competition: