How D.C. Public Schools Gets Buy-In from Picky Student Eaters 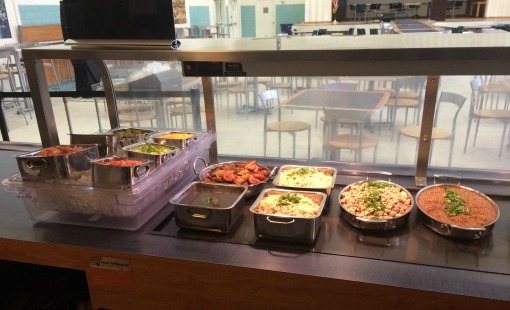 No one understands that better than Rob Jaber, the director of the Office of Food and Nutrition Services at the District of Columbia Public Schools (DCPS). But he’s found the best way to appease picky student appetites is to get them involved in the school meal menu planning process. “We could print the best looking menus in the world, but if the students aren’t buying in, they aren’t buying it,” he says. “Student buy-in is our number one focus.”

Like many districts, DCPS has been undergoing many changes and efforts to make its food both healthier and more appealing to students. Jaber acknowledges that some schools and districts are having challenges meeting the nutrition standards. DCPS implemented the menu pattern and nutrition standards set forth by 2010’s Healthy, Hunger-Free Kids Act the same year the act passed, and he admits participation did dip the following year. However, Jaber says participation is back up.

A big part of that rebound was the fact that Jaber knew he needed to engage DCPS students in the school meal program — and he set out to do just that.

One way he found success was through the Student Food Ambassador Program, which kicked off in fall 2014. Several ideas have already emerged from the program’s focus groups. One idea involved transforming the international food station at one school into a quick-serve Mexican themed station that emulates many of the successful strategies of establishments that students frequent. It’s been immensely successful.

The key behind the success of the international concept is not just the fresh produce or the lean meat. It’s the fact that the students themselves came up with the idea. “Participation took an immediate jump; they loved it,” Jaber says. “The idea came directly from the Food Ambassadors.”

DCPS is working toward implementing this station across many of its schools in the District of Columbia, though the concept won’t work in all schools. One school, for example, has 850 students that arrive to eat in a single lunch period. Unfortunately, the fast-serve concept can’t serve that kind of volume quickly enough. However, the district is looking into a way to serve the same food with a different service model.

Student engagement is also sought through surveys, recipe contests — such as HSC’s Cooking up Change contest — and taste tests. HSC is thrilled to have DCPS participate for the first time in Cooking up Change this year. The April 30 competition will bring students from across the district to develop and prepare tasty meals that meet the current nutrition standards. Chartwells-Thompson School Dining Services, the district’s food service provider, will participate along with local sponsor and local NGO Brainfood. Students competing in Cooking up Change receive culinary training and mentorship through an after-school program with Brainfood.

Student engagement in and ownership of the school meal program helps combat some of the challenges of introducing new foods and menus. The biggest challenge, according to Jaber, has been culture shock. Overnight, the refined white pasta students had been accustomed to changed to whole grain brown pasta. But that’s where education and student engagement come in. “They need to understand why we do it,” says Jaber. “If they don’t believe in the food they’re served, and if they don’t have a part in the process, we’ve lost.” The efforts to increase student satisfaction with the school meal program align with DCPS Chancellor Kaya Henderson’s goal to have 90 percent of students say they like their school by 2017.

Jaber relates a story about when Mayor Muriel Bowser recently came to a school to eat lunch with him and five students. The students offered the typical grumbles about the new school meals, so Jaber decided to turn it into a teachable moment. He asked the students who among them liked Five Guys Burgers and Fries (a popular quick-serve burger chain that started in the D.C. area). All five students raised their hands. He then asked the students how many of them wanted to take a nap after eating a hefty Five Guys meal. Again, all five students raised their hands. Once students saw the correlation between those burgers and not being able to stay awake to focus in class or have the energy to exercise, they better understood the need for healthy food in the school meal program.

It’s small teachable moments like this that can make all the difference in how students react to new foods and meals.

Encouraging students to be active participants in the school meal program, rather than just passive consumers, improves acceptance of meals that meet the new nutrition standards — and counteract some of that pickiness.

To Jaber, success isn’t about a single data point — participation — rather it’s a long-term goal of getting students to understand why nutrition and health matter. In D.C. schools, it seems to be working.