How to Increase Asthma Awareness and Understanding 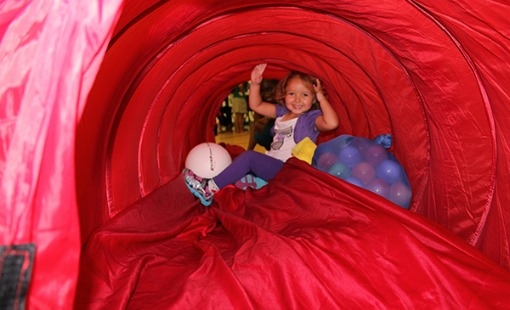 Learn more about asthma management at the EPA’s upcoming webinar.

Last week, Diane Rhodes had elementary school teachers in San Antonio crawling through play tunnels filled with plastic balls and trying to breathe through a coffee straw — all in the name of asthma awareness. It is, after all, National Asthma Awareness month.

Rhodes is the assistant director in the Health Services department at North East Independent School District in San Antonio. The tunnels, balls and straws are part of what she calls her Asthma Obstacle Course, an activity geared toward students and staff that helps them understand the effects of asthma triggers — air fresheners and dust, for example — on students with asthma. The tunnel represents a Bronchiole (smaller airways of the lung where asthma occurs). The various sized balls represent inflammation and increase in mucus that builds up in the airways, and the breathing through a straw represents what it feels like when asthma occurs due to trigger exposure. Rhodes started the obstacle course as part of asthma awareness program she’s been shepherding in the North East Independent School District for the past nine years.

Rhodes has a family history of asthma; her father died from asthma and she and her son have it. When she approached the superintendent almost a decade ago and asked what the district was doing on asthma, the superintendent looked into it and realized the district was not doing nearly as much as it could. Rhodes was hired soon after to create the program. “The healthy environment is not just about asthmatic kids, it’s about all kids,” Rhodes says.

Her first step was taking an assessment of what the district was already doing and what could be improved. A survey of parents with asthmatic children revealed that 75 percent said their children’s physical activity was limited by asthma and many said their children were not getting a good night’s sleep because of the condition. Rhodes said sharing that information — with PE and classroom teachers — was key to getting staff invested in the program. “It’s a constant awareness and education piece,” she said. “With teachers, you can tell them not to have fragrances or air fresheners but when they understand what it feels like when you bring in fragrances or air freshener for someone with asthma, their acceptance of it is totally different.”

Some of the first things the district did was to pull out the carpeting in all the classrooms and to start a green cleaning program. The carpet in many of the classroom was 15 to 20 years old, Rhodes said.

The results are obvious. Rhodes said students at one school campus needed to use their inhalers for symptoms five times more than students at another school campus in the same neighborhood, with the same socioeconomic profile and in a building of the same age. After re-educating the campus on environmental best-practices, the use of inhalers for symptoms dropped 50 percent in the first month and continued that trend the following month.

Indoor air quality was one of the first issues Healthy Schools Campaign worked on, so it’s very near and dear to our hearts — not to mention, extremely important for overall student health. You can learn more about how to increase awareness and education of asthma during the Environmental Protection Agency’s “Managing Asthma for Improved Health and Academic Outcomes” webinar on May 14 from 12-1:30 p.m. Central time. The webinar is part of the EPA’s Indoor Air Quality Master Class Webinar Series. Register here. You can also check out HSC’s Green Clean Schools website to learn more about supporting healthy indoor environments through sustainable green cleaning programs.