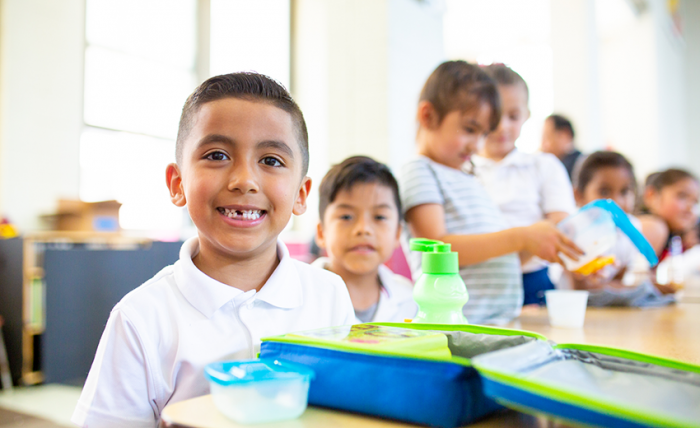 Chicago Public Schools (CPS) and Healthy Schools Campaign (HSC) have been working together for more than a decade to transform the district’s school meal program. Parent voices have always been key to this work.

With the help of parent leaders and school staff, we collected more than 200 surveys from 45 elementary schools, five high schools and one pre-k school. Parents recognize and value the progress CPS has made in the past few years, including several new initiatives. Of the respondents, 90 percent of children participate in the breakfast program and 93 percent participate in the lunch program. When asked to grade the breakfast and lunch programs, almost half of parents gave them a B.

Liliana Hernandez, a parent leader involved in Parents United for Healthy Schools, was one of the parents who participated in the survey. “As a parent it’s very important to me to participate in this school food survey because the opinions and responses will be taken into account and help improve the food that’s served in schools,” she says.

Her two children attend Eli Whitney elementary school. “I have two children with different opinions, but they agree that the food has improved a lot and that they eat with more pleasure than before,” she says. “I have observed that since they are receiving more messages about nutrition at school they are eating more vegetables.”

Liliana would like to see more variety in the foods served at school, a suggestion shared by other parents who completed the survey. Liliana appreciates the kind treatment her children get from cafeteria staff at the school. This is another sentiment felt by most parents (65 percent) of the parents who completed surveys.

We shared the results of this survey with CPS this spring, and the district is working hard to address the feedback and strengthen communication between parents and the district. Also this year, CPS released the Chicago Public Schools’ Pathways to Excellence in School Nutrition document, which outlines specific information related to current and future commitments of the school meal program. The document also includes a summary of the school food policy and a full outline of the standards. Many of the priorities in that document echo the concerns and interests of parents.