An Inspired Way to Track Physical Activity in the Classroom 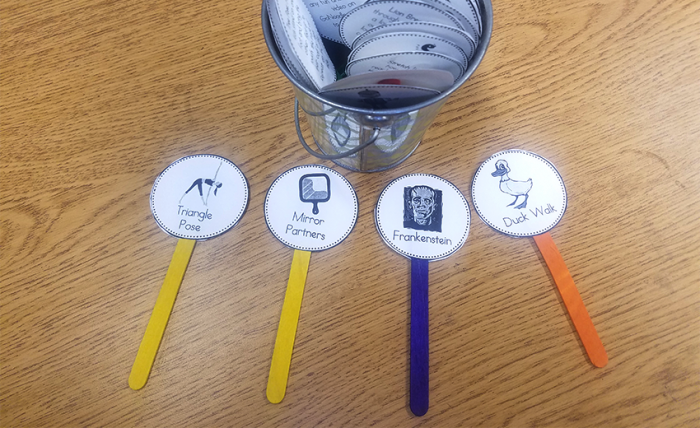 After attending Fit to Learn, Healthy Schools Campaign’s professional development program for Chicago educators, 5th grade teacher Jenny DeLessio-Parson began implementing activity breaks in her classroom at McCutcheon Elementary in the Uptown neighborhood. “I have always tried to incorporate breaks, but I never did it in a very systematic way,” she says. 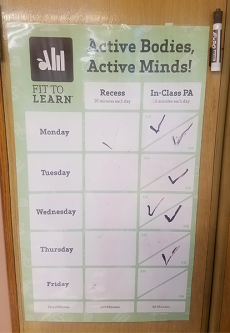 But an activity tracking poster she received at the training sparked an idea. Jenny laminated the poster and uses it everyday in her classroom. She’s even put one of her students who struggles with hyperactivity in charge of the chart. “He reminds me when I’ve forgotten,” she says. “The chart is part of a way to make sure that I’m giving breaks during the day. It’s to make sure we were keeping everyone accountable.”

That accountability extends to the school as a whole. Once the temperature starts to creep into freezing conditions and it’s not safe for students to have outdoor recess, it’s important to make sure they’re still getting that free time, Jenny says. This also serves as a teaching moment for building kids’ skills to advocate for themselves.

Jenny has a bucket full of popsicle sticks that each have a short activity written on them. Students take turns picking a stick, and that’s the physical activity the class does during the break. For example, one of the activities has students pretend to be the Wicked Witch from Wizard of Of and “melt” into the floor.

Jenny uses brain breaks to transition between subjects. Her class has a long afternoon and toward the end of a lesson she notices the kids are more fidgety and disengaged. Once they have a quick two-minute break, she instantly has their attention again, she says. “It really does reset them for the rest of the afternoon,” she says.

Using the chart has changed Jenny’s thoughts about providing students with the physical activity they need. “At the end of the day, when you get really frustrated, you almost view a break as a reward,” she says. “Even though I might know better, in the moment it’s hard. It is a nice way to remind yourself that it’s not about rewarding them, it’s owed to them.”

Jenny’s commitment to the health and wellness of her students doesn’t stop with activity breaks. Her big goal is to incorporate more nutrition education into her regular curriculum. She wants her students to lead theme weeks at the school and educate younger students. For example, one week could focus on making sure students are drinking enough water. Her students would use academic skills like research and presenting to educate other students in the school.

We’re so excited to see the great work Jenny is doing in her classroom and her school!