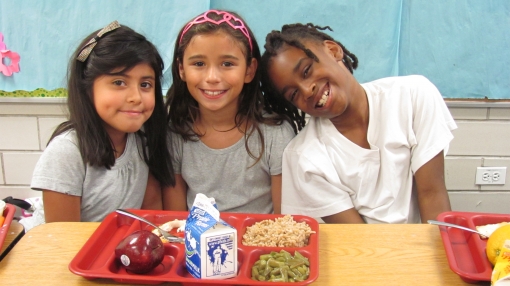 If you’ve been following the debate surrounding the re-authorization of the Child Nutrition Act (called the Healthy, Hunger-Free Kids Act in its latest iteration), much of it has focused on if children are throwing away their food rather than eating it. Many media outlets have concluded that means kids don’t like the new, healthier food and the nutrition standards should be scrapped.

But it’s not that simple. While numerous studies show plate waste going downwith the new nutrition standards, new research shows that kids that are throwing away their food may not be doing so because they don’t like it, but because they just don’t have enough time to eat it.

Researchers at Harvard analyzed the school meals of more than 1,000 students in six elementary and middle schools in a low-income urban school district in Massachusetts. Students with less than 20 minutes to eat lunch didn’t just toss their veggies into the trash, they ate less of everything than students who had at least 25 minutes to eat. That suggests, at least, that students are willing—and even want—to eat their vegetables, they just don’t have enough time to do so.

“We were surprised by some of the results because I expected that with less time children may quickly eat their entrée and drink their milk but throw away all of their fruits and vegetables. Not so—we found they got a start on everything, but couldn’t come close to finishing with less time to eat,” said Eric Rimm, professor of epidemiology and nutrition at Harvard Chan School and the study’s senior author.

We all want to make sure students are eating the best food that they can while at school. To do that, we have to first make sure the food they’re served is healthy. But there are so many things that go into a school cafeteria environment—and one of those is making sure students have enough time to eat their full meals.

What’s great about this information is that this is something local schools can control as each school in responsible for its own scheduling. As a parent, teacher or advocate, you can talk to your school leaders about the school day and see if kids have enough time to eat. Figure out how much time they have to walk to their cafeteria, wash hands, wait in line and eat. If it’s not enough time, our bet is you can improve student nutrition by adding a few additional minutes to the lunch period.