Listen Along with HSC: Back to the Basics with a School Food Boot Camp 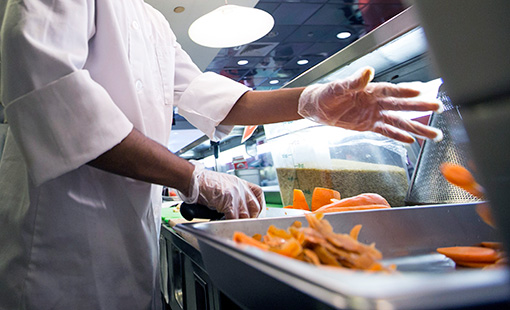 Processed food didn’t used to be the norm in school cafeterias. A new boot camp is teaching school culinary workers to return to the roots of home-cooked food.

Here at HSC, we love a good conversation about school food. In part, that’s because it’s about so much more than it seems. The topic of school food connects to issues as wide-ranging as health disparities, transportation systems, farming practices and our values as a society.

Now, we have a new place to indulge our love for a lunchroom chat: the Inside School Food radio program. The show is hosted by Laura Stanley, a food journalist, school food advocate and longtime friend of HSC. It’s a treat to follow along as she delves into the details of school food with a diverse group of interesting and engaging guests. The episodes are brief, entertaining and informative. We fully recommend it! You can listen live (Mondays at 11 a.m. EST) or download the episodes and listen later. We’ll be sharing our thoughts and observations on a few episodes here on HSC’s blog.

Today, we listen along to an episode called (Re)-learning to cook: Boot camp for K-12 food service workers.

Becky Anderson remembers standing by the stove in her school kitchen as her grandmother stirred a pot of simmering homemade spaghetti sauce she made for school lunch. On the day of the school’s popular “turkey dinner” lunch, she watched her grandmother debone a turkey.

“There was no such thing as processed food in schools,” Anderson says.

Now Anderson, a third-generation school food professional, is guiding the program she manages away from processed food and toward the type of real cooking her grandmother perfected.

In this episode, Laura Stanley chats with Anderson about the “culinary boot camp” that has prompted and supported this return to real cooking. She also talks with Jeffrey Proulx of Washington County Public Schools and Stuart Eidel of the Maryland Department of Education.

The boot camp provides hands-on culinary training within a very specific scope of skills that will be practical in a school kitchen.

Eidel explains that he recruits local chefs as trainers then works closely with them to ensure the skills they teach match the school food environment. For example, they focus on knife skills, food presentation principles and techniques — such as roasting and blanching — that enhance the appeal of veggies. The boot camp also includes a strong focus on the skills required to be a trainer, so that participants can share their new skills in a meaningful way when they return to their workplace.

The resulting new culinary and planning skills have opened a range of new possibilities on the menu and in the cafeteria. From fresh salads to scratch-cooked roast beef, the new meals in Anderson’s district are getting positive reviews from students who enjoy them and from staff who prepare them.

“I think they take more pride in what they prepare every day, because it’s hands-on,” Anderson explains. “It doesn’t just get dumped out of a bag and heated.”

As a result of these new skills, Proulx says, he’s able to keep more of the district’s money in the local economy. Instead of buying processed frozen food — usually processed far from Maryland — he’s able to purchase unprocessed ingredients and increase staff hours to do the preparation on site.

The new boot camp is paid for with funds the USDA has provided every state to support implementation of the updated nutrition standards rolled out with the 2010 Healthy Hunger-Free Kids Act. It’s a great model and an important example for us to keep in mind as the national discussion about school food focuses on these standards and whether schools are equipped to successfully implement them. By investing in staff skills, Maryland is making meals that meet the new standards appealing to students and is re-igniting the proud tradition of real cooking in schools.

“When I wake up every day and come to work, I feel better about everything we’re going to do that day,” Anderson says about changes she’s been able to make since the boot camp. The students appreciate the results, too, she says. Because when it comes to a good lunch, the appeal is simple: “It’s so much nicer when you make it from fresh.”