Listen Along with HSC: Behind the Scenes with Laura Stanley 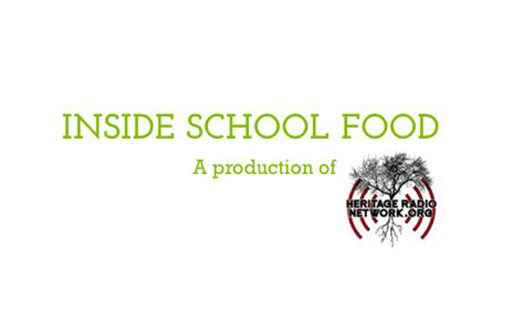 Longtime food journalist and Good Food advocate Laura Stanley created Inside School Food in response to a gap she observed in media coverage of school food.

Here at HSC, we love a good conversation about school food. In part, that’s because it’s about so much more than it seems. The topic of school food connects to issues as wide-ranging as health disparities, transportation systems, farming practices and our values as a society.

Now, we have a new place to indulge our love for a lunchroom chat: the Inside School Food radio program. The show is hosted by Laura Stanley, a food journalist, school food advocate and longtime friend of HSC. It’s a treat to follow along as she delves into the details of school food with a diverse group of interesting and engaging guests. The episodes are brief, entertaining and informative. We fully recommend it! You can listen live (Mondays at 11 a.m. EST) or download the episodes and listen later. We’ll be sharing our thoughts and observations on a few episodes here on HSC’s blog.

It’s a rare day when you can turn on the radio and hear the host discussing socio-economic justice in school meals as a national security issue. That’s exactly what Laura Stanley was talking about on a recent Monday with Audrey Rowe, head of food and nutrition services at the USDA, on a special Martin Luther King Day episode of Inside School Food. Another recent episode found her discussing the timing issues involved with serving fresh, locally-caught fish for school lunch. It’s this balance of the nuts-and-bolts details of running a school meal program with the big-picture understanding of its importance to our nation that makes Inside School Food both so engaging and so unique.

Inside School Food is a production of the Brooklyn, New York-based Heritage Radio Network, a unique Internet station committed to archiving, protecting and advancing our country’s rich food culture through programs that give voice to America’s leading food professionals, farmers, policy experts, artists and tastemakers.

A longtime food journalist and Good Food advocate, Stanley created the show in response to a gap she observed in media coverage of school food. As coverage of the Healthy Hunger-Free Kids Act increased, she says, she couldn’t help but notice that the coverage often under-represented or misrepresented the reality that students and school food service staff were facing. In particular, she noted that communities in need were too often missing from media discussion around school food.

With Inside School Food, a weekly half-hour program, Stanley seeks to foster conversation around “constructive solutions to really complex issues.” While the show spotlights guests with creative, progressive approaches to school food challenges, Stanley explains she is very intentional about not backing away from the difficult and complex questions often tangled in this work. She focuses on informed and inquisitive reporting rather than simple feel-good stories or a single message about the path forward. It’s a “safe space for frank and constructive conversation.”

Stanley explains she chose radio because she needed a medium that would work for really busy people. “You can fit it into your day,” she says, whether that means listening in the car, while cooking dinner or at your desk. With this busy audience in mind, the show is quick and to-the-point. “We go right to it,” she says. “We drill down right away.” The show’s audience includes school food service professionals and decision-makers as well as advocates, educators, policy makers and many others.

Though this is Stanley’s first experience as a radio host, she’s been preparing informally (and unintentionally) for years as an avid listener of NPR’s Brian Lehrer and John Hockenberry, who also broadcast live.

Her guests come from large districts, small districts, urban and rural areas, communities in poverty and high-income communities. She began building her network during years working for School Food FOCUS (a collaborative of large school districts) and quickly expanded it to include smaller districts as well. Stanley also turns to the show’s advisers — including HSC’s Rochelle Davis — for recommendations. (Rochelle also featured as a guest alongside a student chef and Chicago Public Schools’ culinary arts program manager David Blackmon on an excellent episode spotlighting Cooking up Change.) This range of guests brings a wide variety of opinions, but Stanley says there’s one thing everyone agrees on: There really just isn’t enough money.

That’s an especially critical message in the lead-up to this year’s reauthorization of the Child Nutrition Act.

Stanley is hoping the show will be a resource for those seeking background — reporters, Congressional staffers, advocates and many others — in the debate leading up to reauthorization. As the show brings such a clear focus on constructive solutions and what Audrey Rowe refers to as “the solvable nature of the challenges” involved, it provides excellent background for those reflecting on the how-to as well as the why of healthy school food.

What’s next? Stanley hopes to begin connecting with sponsors that are aligned with the show’s — and Heritage Radio’s — goals and values. With this, she can initiate  more on-site reporting, beginning with New York City schools in her own backyard.

We love the idea of tuning in to an episode in the school cafeteria and are excited to catch the episodes in the year ahead. Because no matter how informative and practical it is, there’s something about a good radio show that is also just fascinating and entertaining for its own sake, something you look forward to and just really like.

“I do like it so much,” Stanley says of the show. “I don’t think you can do anything well unless you like it.”

Previous
Listen Along with HSC: Back to the Basics with a School Food Boot Camp
Next
Meet the Two-Time Green Cleaning Winner Who Champions Children’s Health