Look to Science not Politics for School Food 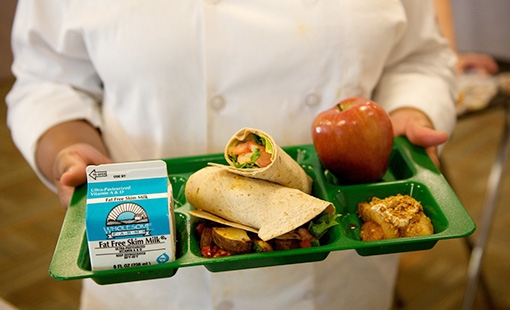 The school meal standards were developed by our nation’s best doctors, nurses, dieticians and scientists — not politicians.

Agriculture Secretary Tom Vilsack, Education Secretary Arne Duncan, and Health and Human Services Secretary Sylvia Burwell teamed up yesterday to communicate a strong message about the national school nutrition standards: “Look to science, not politics, for reauthorization of the Child Nutrition Act,” they wrote in a USA Today op-ed.

It’s really hard to argue with their case for keeping school lunches healthy.

They start with the common ground that as parents we all want what’s best for our kids. Of course we do. And while, as parents, we lay the foundation for our children’s health and success, at some point we have to rely on others for help in this endeavor — whether it’s a doctor healing a broken bone, an educator teaching our kids math, or a school food service provider offering up a healthy meal.

And yet, that third point about the healthy meal has managed to spark public outcry of government overreach and a partisan political battle over how much whole grain is too much and how much sodium is too little.

If you took your child to the doctor with a broken arm, would you expect him or her to take a whack at it with a sledge hammer? That’s an extreme example. But sadly, when more than a third of all school children are overweight or obese (that number jumps to more than 50% in many lower-income communities), it’s not altogether different than continuing to feed our kids high sodium, high fat, high sugar, low nutritional value food in our school cafeterias. We’re taking a bad problem and making it far worse.

As the trio of secretaries explain it, this is first and foremost about the health of our kids. But it’s also about more than that. The article states: “Our children are battling an obesity epidemic that impacts the long-term health of the American people and, according to retired U.S. generals, threatens our national security by making almost one in three young adults unfit to serve in our nation’s military.”

“America has the second highest obesity rate in the world,” they write. “The cost of treating obesity-related illnesses is a shocking $190.2 billion per year, dragging down our economy and increasing budget deficits.”

Despite all of this, some members of Congress are calling for the healthier school meal standards to be rolled back. And the School Nutrition Association is suggesting the same because they think the standards are too strict and students are tossing too many apples and bananas in the trash.

Meanwhile, more than 90% of all schools across the country are meeting or exceeding the standards, and study after study has shown that since the current school nutrition standards went into effect in 2012, more parents support and more students like the school meals, and students are eating more fruits and vegetables.

The bottom line, the op-ed states, “Is that these meal standards were developed by our nation’s best doctors, nurses, dieticians and scientists — not our politicians. These medical and nutrition professionals know better than anyone that healthy options mean healthy kids, and later, healthy adults.”

You don’t fix a broken bone with a sledgehammer, just like you don’t fix the obesity epidemic with a Coke and fries for lunch every day. And we shouldn’t let Congress overlook science when it comes to school food.

Previous
Thanks and Farewell to Dr. Stephanie Whyte
Next
National Green Schoolyard Leaders to Convene in Chicago this Spring