Los Angeles Student Chefs Channel their Culture for the Win 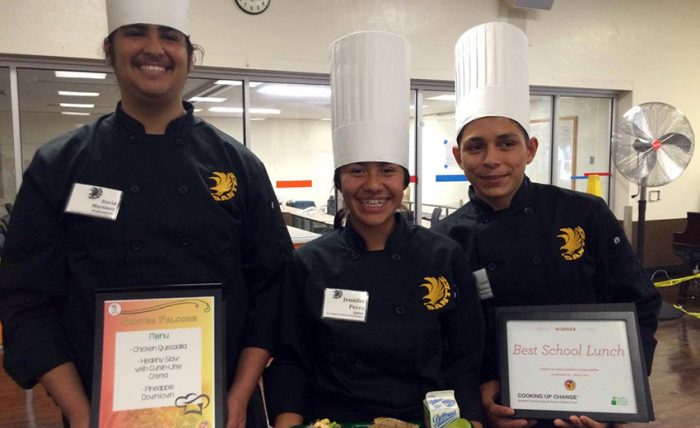 When thinking about what dish to make for the Cooking up Change Los Angeles competition, student chefs Tochtli, David and Jennifer wanted to bring together their culture and community into one dish. The result? A healthy Chicken Quesadilla.

“In my culture, eating quesadillas is very common, but usually they aren’t as healthy as you want them to be,” says Tochtli. “So we lowered the sodium and added healthy elements like fruit and lime juice.”

The team paired their quesadilla with Healthy Slaw with Cumin-Lime Dressing and Pineapple Downtown. And it’s that menu that impressed the judges. The team from Santee Education Complex took first place, and they will join teams from across the country in Washington, D.C., for the national finals.

The team developed an understanding of what it takes to create healthy school meals with a limited budget. “Originally, we were planning on doing the quesadilla with sweet potatoes, but that was too expensive,” Jennifer says. The team overcame budget and nutrition standards to create a delicious meal.

The contest also taught them more about their own eating habits. “Before I entered this competition, I used to eat a lot of junk food—chips and soda,” says Tochtli. “By doing this program, it made me realize all the unhealthy stuff I was putting in my body. Now, I eat more healthy, and I know how to cook healthy.”

We’re excited to see all the student chefs in Washington, D.C.. And congrats to Santee for their big win in Los Angeles. Here are all the teams that competed in Los Angeles Unified School District’s Cooking up Change competition: