More Than Just a Meal: Principals’ Breakfast Has Been A Catalyst For Change 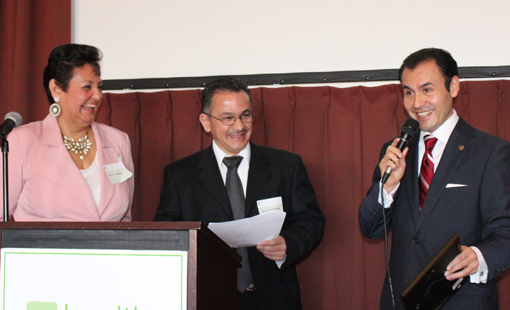 Since its inception, the Principals’ Breakfast has provided an important avenue for dialogue, networking, synergy for changing policies, a way to celebrate the accomplishments of parents and principals working together.

On Thursday morning, more than 150 parents and principals will come together for our 7th annual Principals’ Breakfast for Healthy Schools. At the National Museum of Mexican Art in Pilsen, they will sit down over a wonderful healthy breakfast, but the morning meal is hardly the only point. Since its inception, the Principals’ Breakfast has provided an important avenue for dialogue, networking, synergy for changing policies, a way to celebrate the accomplishments of parents and principals working together, from bringing recess back to elementary schools to providing a shining national example of Michelle Obama’s “Let’s Move!” campaign with Go for the Gold, and a way to create a road map to an even brighter future.

Early on in our development of Parents United for Healthy Schools, we were making connections that would help implement new policies. At the time, however, there were no forums for parents and principals to exchange ideas and information. We all felt as though creating dialogue with principals would be an effective way to figure out how new models and policies were going to work.

We held the first Principals’ Breakfast in 2007, as Chicago Public Schools were rolling out new wellness policies. There was no real mechanism for making an announcement and informing parents about what these policies were, why they were important and what role they could play in implementation. We used the morning as an opportunity to introduce mechanisms for the new policy and discuss nutrition. Ever since, parents have had a major role in exchanging ideas with principals, holding schools accountable and leading the way in making sure wellness policies are implemented.

The following year, attendees of the Principals’ Breakfast championed breakfast in another venue: classrooms. From the models presented and perspective of parents, principals saw the importance of Breakfast in the Classroom and went back to their schools with the pilot program model developed by Parents United and Chicago Public Schools. By the following Principals’ Breakfast, 200 schools had Breakfast in the Classroom. The event has also helped lay the groundwork for bringing back recess to all CPS elementary schools, creating healthier school lunch menus and developing a groundswell for people to embrace wellness teams and positive changes.

Going for the Gold

The Breakfast has also served as a forum for principals and parents to network with one another. Principals provide models for how these changes have worked in their schools, not only just for other principals, but for the parents. Parents can take these models back to their school administrators and apply them to their school communities. It’s a way of saying, “If this school is doing it, we can do it too.”

Even more voices have come into the space of the Breakfast. We’ve had state and local politicians, officials, administrators from the U.S. Department of Agriculture and Chicago Public Schools administrators present, to name a few, but the most fundamental piece is still the catalyst conversations from our parents and principals and the actions they take together.

Every year, the enthusiasm and drive for change that surrounds the Principals’ Breakfast grows ever larger. This small but committed group has grown to more than 200 people, and between 50 and 60 principals, all of them committed to healthier schools, healthier students and a meaningful exchange of ideas that will start them on that path. Chicago is ready for change, and we hope the Principals’ Breakfast sparks even more important reforms for our schools, communities and our children in the years to come.

Previous
Chicago Principals Share Strategies to Model Healthy, Active Behavior in Schools
Next
How to Start a School Garden: Fit to Learn Helps Teachers Plant Seeds for the Future