Morrill Celebrates Year One of their New Schoolyard 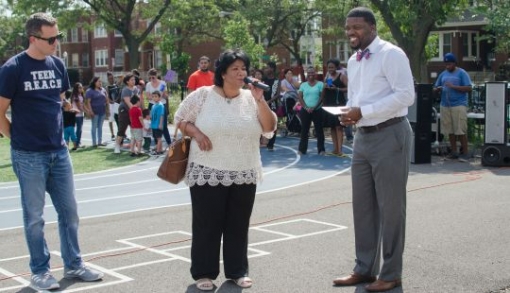 Hundreds of community members — students, teachers, parents, neighbors — came together at Morrill Elementary School on Sept. 3 for a one-year anniversary celebration of the new Space to Grow schoolyard.

What once was a sea of crumbling asphalt and broken benches is now an oasis. At every hour of the day and every day of the week, the schoolyard outside Morrill is teeming with activity: kids playing soccer, teens playing basketball and the community coming together.

“I love the schoolyard because it brings families together,” said local resident Terry Smith, whose son is a first-grader at Morrill. “Sometimes people go to the garden to have a picnic — just watching the flowers. It’s better this way. When this wasn’t here, this was just a junk place. Everybody’s trying to keep it beautiful.”

Last week was less picnic and more party. Despite the stifling heat, the schoolyard at Morrill was full. New principal Mr. Rashad Talley introduced himself to the school community and former principal Mike Beyer spoke about how far they’d come in the past year. Alderman Toni Foulkes celebrated, too, and wished the students of Morrill a successful school year.

Representatives from several organizations, including The Kitchen Community, Southwest Organizing Partnership and Neighborhood Housing Services attended and distributed information. Columbia College Center for Community Arts Partnerships did a cooking demonstration that showed the attendees how to incorporate fresh produce and herbs from the garden into their cooking. Chicago’s Safe Routes and Bicycling Ambassadors had a bike safety demonstration, and the Metropolitan Water Reclamation District of Greater Chicago hosted a raffle that gave out rain barrels to two lucky attendees.

Healthy Schools Campaign and Openlands also shared information about our programs and engagement opportunities for parents, teachers and community members.

In 2014, Morrill was selected as one of the first four schools to receive a $1.5 million schoolyard transformation from the Space to Grow program. Space to Grow is an innovative public-private partnership co-managed by Healthy Schools Campaign and Openlands that transforms Chicago schoolyards into centers of school and community life that support active and healthy lifestyles, outdoor learning, physical education and engagement with nature. The program receives capital funding and support from Chicago Public Schools, the Chicago Department of Water Management, and the Metropolitan Water Reclamation District of Greater Chicago.

Morrill is in the Chicago Lawn neighborhood on Chicago’s southwest side, a neighborhood — like so many in Chicago — that struggles with poverty and gangs. The neighborhood also had a flooding problem. The new schoolyard not only addresses flooding issues through the use of green stormwater infrastructure (think, rain gardens and other natural elements) but also provides a place for students to engage in physical education and learning.

The anniversary celebration served as a way to highlight the strength of the community and just how far they have come in the past year. Instead of tripping over cracked asphalt, students are jogging around the track and playing soccer. The community has taken ownership of the schoolyard and will ensure it will serve as a gathering place for years to come.