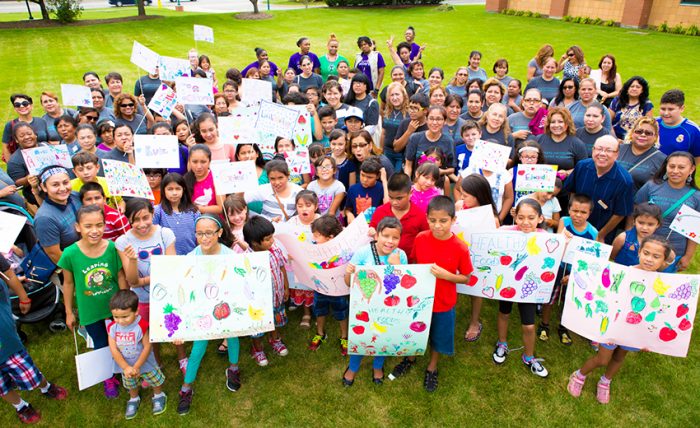 Every year, the Parent Leadership Institute is an inspiring and energizing experience hosted by Parents United for Healthy Schools to train dedicated parent leaders. This upcoming school year looks to be a difficult one for Chicago Public Schools (CPS) with budget cuts and layoffs, and it’s more important than ever to focus on health and wellness issues that affect all of the district’s 400,000 students. The three-day training culminated in a Healthy Family Parade featuring hand-drawn artwork from children of attendees and chants of “What do we love? Healthy foods!”

Sixty parent leaders, who were selected to attend the training, completed the institute last week and are ready to take their knowledge to the schools to effect change. As part of this leadership group, parents developed strategies for making healthy eating and physical activity a central part of the school experience for all children in Chicago. Veteran parent leaders and experts provided support and practical ideas for taking their leadership to the next level. Parents and caregivers also had the opportunity to share experiences and connect with other parent leaders from across Chicago who are making a difference for children’s health and wellness in their schools and communities.

Parents United for Healthy Schools is a leading force in creating healthy school environments through organized parent leadership. Healthy Schools Campaign convened parents in 2006 out of a growing concern for the skyrocketing rates of childhood obesity in Chicago and the growing health disparities in our city. Parents United equips parents with the knowledge and skills to advocate for policies and programs that promote healthy eating and active lifestyles in their schools, communities and in their homes.

The institute is not a top-down training; successful parent leaders are front and center. Veteran parent leaders shared their lessons learned through a panel discussion. Maria Cristobal talked about how she’s helped transform the fundraising at Madero Middle School from featuring unhealthy foods to featuring healthy and exciting treats—including pumpkins made out of mandarins at Halloween time. Parents in attendance learned the basics of community organizing through hands-on sessions and role playing exercises.

Parents who completed the training are now wellness champions committed to being a part of a national movement to promote school health and wellness and create healthy lifestyles for students and their families. Each parent received a certificate recognizing this achievement. Each school with parents in attendance also received a certificate that will be presented to the principal by the parent leaders.

Jesus “Chuy” Garcia, the Cook County Board Commissioner, told parent leaders that their role as leaders is so important to the continued fight for equality in schools and the city of Chicago. If students don’t have access to healthy environments, they won’t be the best students they can be. And, like parent leader Martha Ramirez said during the parent panel: “Children are the future in the country and in the world. We can be part of the change.”