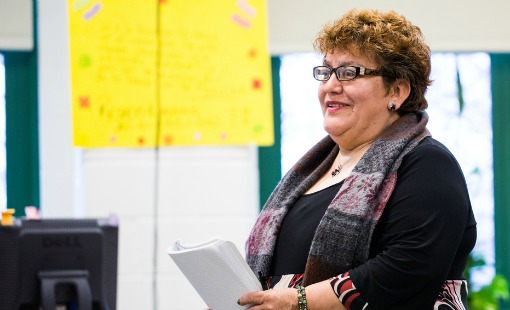 Grissom Elementary puts its new schoolyard to good use.

When it used to rain at Grissom Elementary, it would pour. The schoolyard would be flooded for days after a large storm, and students would be unable to run around outside or use the playground equipment.

But as Chicago gears up for spring rains this year, students at Grissom Elementary won’t have to worry as much about the storms hindering their recess and play time. That’s because of Grissom’s new Space to Grow schoolyard renovation, a $1.5 million transformation designed to encourage physical activity and outdoor learning, while helping address neighborhood flooding issues. The new schoolyard at Grissom is better able to handle a spring deluge.

Healthy Schools Campaign co-manages Space to Grow with Openlands, a Chicago-based conservation organization. With capital funding and leadership from Chicago Public Schools, the Chicago Department of Water Management and the Metropolitan Water Reclamation District of Greater Chicago, the program is transforming Chicago’s outdated — and in many cases, crumbling — schoolyards into vibrant outdoor spaces that benefit students, community members and the environment.

Grissom Elementary was one of the first four schools selected for a Space to Grow schoolyard renovation last year. Space to Grow plans to transform 34 Chicago schoolyards overall, six of which will be built this summer.

As the long Chicago winter thaws, we’re learning more about the changes this great program is having on the school community at Grissom.

The transformation at Grissom included raised vegetable gardens, age appropriate playground equipment, two half-court basketball courts and a running track. Rain gardens that soak water into the earth and away from Chicago’s often-overwhelmed sewers will keep Grissom’s new schoolyard above water. “It’s a wonderful space that we ended up with after a whole lot of parent, community and student input,” Principal Dennis Sweeney said. “The kids use it all the time.”

Although it’s early in the season, Sweeney imagines students in an art class drawing still lifes of the garden’s many plants and students in a science class exploring the entire ecosystem functions to help keep our bodies and homes healthy.

And it’s going to good use. In October, dozens of volunteers — students, parents, teachers and community members — planted thousands of plants in the recently opened area. This is the school’s first growing season and the produce will likely be given to the community that will help care for the garden over the summer. In the future, Sweeney hopes the produce can be incorporated into the school meal program. Space to Grow is helping the school on that path by offering garden trainings and workshops, and connecting schools with the Eat What You Grow certification program offered by CPS’ Office of School Health and Wellness.

A planting day is coming up this month, and assistant principal Andi Eichhorn is excited that each of the students at Grissom will get a chance to get their hands dirty. “I just feel strongly that if students are doing the planting, there’s a sense of ownership and they’ll help protect it,” she said.

It’s not just the students who feel ownership over the new space. Eichhorn was leaving the building around 4:30 p.m. one afternoon and recognized not only children from Grissom but also high school kids from the neighborhood using the space. In addition to children, parents and community members are also involved. “There was so much input from the parents and the community that there’s ownership of the campus,” she said. “Different parts of the project have pulled in different parts of the community.”

And that’s a great thing. The old space was an eyesore in the community, she said, but now she’s in awe every time she approaches the school.