One Principal’s Journey to Transform a Schoolyard 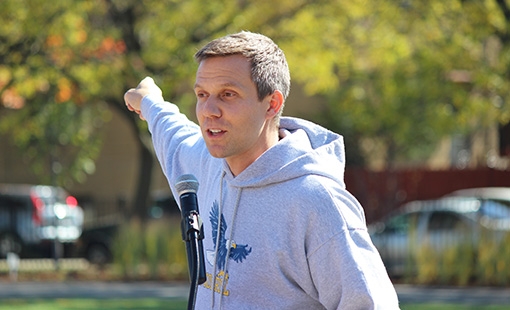 When Mike Beyer started as principal at Morrill Elementary School four years ago, one of the first things he did was take a bunch of photos of the playground area. “It was very desolate,” he said. “There were broken benches, and if you looked at the community spaces, they were only used by gang members.”

Morrill is situated in Chicago Lawn on the city’s southwest side — a neighborhood that has long struggled with gang activity. Beyer heard stories from parents about locking their kids’ bikes up in their basements and only taking them out to pack them into the car and driving six miles away to Hyde Park to ride bikes.

After he had taken enough photos, Beyer sent out a slideshow to everyone he could think of in an appeal for funding to help renovate the schoolyard. The only person to respond was Openlands’ Jaime Zaplatosch, but the organization did not have any money to help Morrill at the time. About a year later, Jaime called back to say they had enough money for a community garden, which would improve one corner of Morril’s crumbling schoolyard.

Then, in 2014, Healthy Schools Campaign and Openlands partnered up for our Space to Grow program, and Morrill was selected as one of the first four schools to receive a $1.5 million schoolyard transformation. Space to Grow is an innovative public-private partnership co-managed by Healthy Schools Campaign and Openlands that transforms Chicago schoolyards into centers of school and community life that support active and healthy lifestyles, outdoor learning, physical education and engagement with nature. The program receives capital funding and support from Chicago Public Schools, the Chicago Department of Water Management, and the Metropolitan Water Reclamation District of Greater Chicago.

Beyer says he was 100 percent on board with the plan to transform Morrill’s schoolyard, and the planning process began. One of the first challenges the school had to overcome was an opinion shared by many community members that in order to prevent the new schoolyard from being taken over by gangs, it had to be guarded by a tall fence. Beyer and others fought back against that opinion by educating the community about the idea of “positive loitering,” in which the presence of community members engaged in positive activities deters negative elements. “We said to them, ‘We could do that, however it would be better if it was open to the community. Some of the negative elements will find their way in. We can either get rid of those negative elements or turn them around.’”

When the schoolyard was unveiled in October 2014, Beyer said the change was immediate. “The community went from feeling like they had to drive across town to ride bikes to opening the door and playing,” he said. “That affects your social and emotional being and your sense of self. It changes the climate and culture of the neighborhood.”

Morrill opens its doors to students at 8 a.m. each morning, but Beyer says there are usually students playing basketball by 7 a.m. And the schoolyard is used by the surrounding community, too. This past February, the entire city of Chicago was blanketed with 20 inches of snow — the fifth biggest snowfall on record — but the first thing Beyer noticed at the school were  footprints under the basketball hoop.