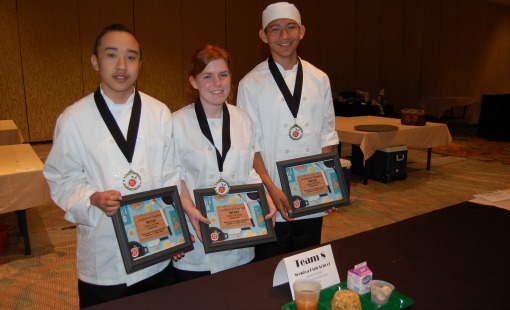 The winning team of Cooking up Change in Orlando found inspiration from a popular Chinese restaurant.

Kobe Steakhouse is a popular Chinese restaurant in Orlando, Florida. But it’s also where the Wekiva High School student culinary team got the inspiration for their winning Cooking up Change recipe.

“We all really enjoy going to Kobe’s, and we wanted to do something different for our recipe,” said student chef Lauren E. “There’s not a lot of Chinese food in the cafeteria right now, and we decided to make something like that.”

Cooking up Change challenges high school culinary students from across the country to create healthy school meals that their peers will enjoy. At the heart of the challenge is the fact that the meals must adhere to the school district’s nutrition guidelines, ingredient lists and budget constraints, and must be prepared using standard school kitchen equipment.

The Wekiva High School team’s menu of Chicken Fried Rice with Miyabi Japanese Onion Soup and Peanut Butter Banana went through several iterations before it was contest ready. “I learned that healthy cooking is very difficult. A lot of times we had to keep changing the recipes. Chinese food is really good, but it’s not the healthiest,” student chef Andy O. said.

One of the challenges was the amount of salt in the menu’s inspiration. “We had to take something that usually had high sodium, and it was really kind of difficult to make it healthier,” said Lauren E.

Student chef Anthony T., who is Chinese, has watched his mother prepare quite a bit of Chinese food over the years. He thought other students would be interested in trying food from his culture — especially with a healthy twist. “We had to change the sodium, fat and calories in the recipe,” he said. “We thought it would be terrible, but it was pretty good. Healthy food can be good, too, as long as you make it delicious.”

The judges thought the menu was delicious, too. Wekiva went up against eight teams from four Orlando high schools in the competition on December 11, 2014. Judges included staff from Orange County Public Schools and the Florida Department of Agriculture and Consumer Services, as well as members of the media.

All of the Wekiva student chefs said participating in the competition helped them think more critically about the things they eat. “It really made me think about what’s really going into our food,” said Lauren E.

Congratulations to the Wekiva team — and all the Orlando student chefs — for proving that school meals can be healthy and delicious.

Here are the other six teams that competed in Orlando:

Previous
One Year Anniversary: The National Collaborative on Education and Health
Next
Know a School Nurse with Great Ideas?