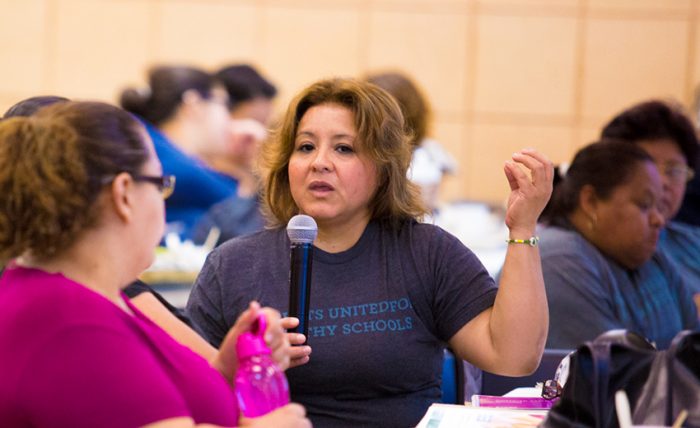 At the end of this summer, Parents United for Healthy Schools welcomed 51 parent leaders from 34 schools to the first session of this year’s Parent Leadership Institute, where they learned how parents can be most effective in implementing the Chicago Public Schools (CPS) wellness policy and transforming schools into healthy environments.

For over a decade, the Parent Leadership Institute has provided promising parent leaders with organizing skills, knowledge about CPS wellness policies and best practices for working with schools and principals. One of the keys to the Institute is creating a community of support among parent leaders.

The parents that attended the session are already in a great position to effect change at their schools this year. Nearly 90 percent of them are already members of their school’s Wellness Team, and nearly 50 percent are on their Local School Council, an elected body charged with making key decisions about a school.

One of those parents is Isabel Rodriguez from Marquette Elementary School on Chicago’s Southwest side. Isabel has four children: an 18-year-old, 14-year-old twins and a 10-year-old. Isabel got involved with Parents United after attending the Principals’ Breakfast in 2016. “I spoke with some of the mothers that participated, and I was impressed with seeing how many principals and parents from other schools were involved,” she said. “I wanted to be part of that.”

The goal of this first session was to give parents an overview of the specific elements in CPS’ new wellness policy and some perspective on just how far health and wellness has come in Chicago Public Schools in the past decade. Since joining Parents United, Isabel has made healthy changes at home, started bringing healthy foods to school meetings and has become a wellness champion at her school. “I would like to see at my school fully implement the wellness policy to improve school meals and plan healthy fundraising,” she said.

Next month, we’re hosting another session for parents that will focus on parent-led wellness teams and the most effective ways for wellness teams to report quarterly progress to the Local School Council.