Parents United at 10: How We Use Petitions 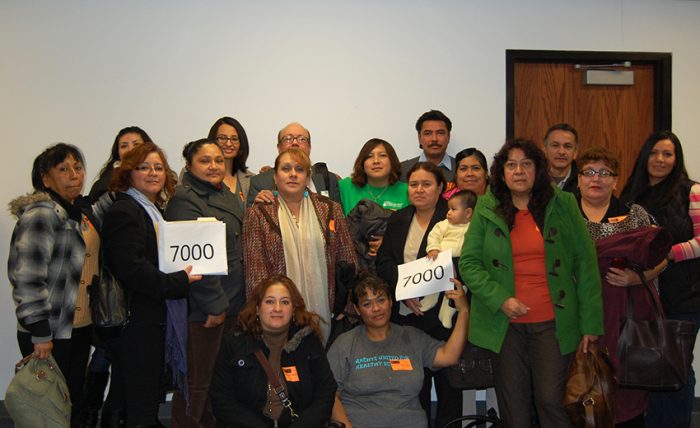 This fall, we’re celebrating 10 years of Parents United for Healthy Schools. For the past decade, Parents United has been a leading force in creating healthy school environments through organized parent leadership. This parent-led movement advocates to create a better future for all Chicago children by working together with schools to create healthy environments that support student learning. In this blog series, we’re revisiting some of the successes and milestones of this movement.

We first organized Parents United for Healthy Schools around the Chicago Public Schools (CPS) Wellness Policy in 2006 to show CPS that parents were passionate about making Chicago schools healthier places for students to learn. That show of support ensured that parent feedback and participation was part of the process for passing that wellness policy.

Over the past decade, we’ve continued to impact policy by showing support for various initiatives. One way we’ve done that is through petition drives. “Petition drives have been an effective tool for us, one that allows parents to get to the table with Chicago Public Schools,” says Guillermo Gomez, Vice President of Urban Affairs at Healthy Schools Campaign.

One of the movement’s most successful petition drives was around physical education. Parents collected more than 7,000 signatures in support of daily physical education at more than 30 schools across the city. Parent leaders held one-on-one meetings with other parents in their communities to educate them about the issue and encourage their support. This show of support from the community led to the Chicago Board of Education adopting a new physical education policy in 2014.

In 2009, Parents United submitted more than 4,000 petitions in support of recess and called for the creation of the Recess Task Force. Together with the district, we put together the Recess Development Plan, which is currently being used to transition physical activity into the school day. These signatures represent the demand for education that addresses the whole child and includes health and wellness.

These petition drives are not just about collecting signatures, though. Parents present these petitions to such city leaders as Chicago Public Schools leadership and the Chicago Board of Education. Along with those signatures, they often testify in front of these groups, using their experience and leadership to present a clear, credible argument for health and wellness changes.

Since that first rally, Parents United has advocated for the return of recess, championed Breakfast in the Classroom, collected signatures in support of daily physical education and pioneered the parent-led school wellness team model. We’ll revisit many of these accomplishments in future blogs in this series.

Previous
Cooking up Change at Home: Vesuvio Chicken and Spaghetti
Next
Parents United at 10: Why We Host a Parent Leadership Summit