Raising Money in a Healthy Way at Greene 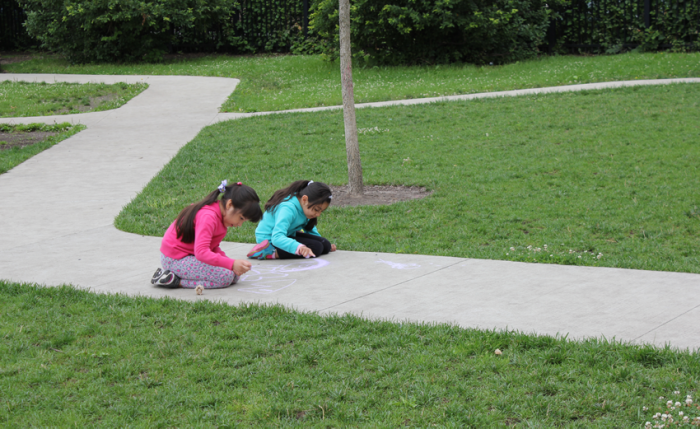 For three years now, Nathanael Greene Elementary School in Chicago’s McKinley Park neighborhood has been holding walk-a-thons to raise money for the school in a healthy way. The walk-a-thon is a great way to combine the school’s healthy culture and its need to raise money to support programming and field trips.

Making sure that fundraisers during the school day—defined as 12 a.m. until 30 minutes after dismissal—meet nutrition criteria is a key part of the wellness policy. According to data from Chicago Public Schools (CPS), 77 percent of CPS schools are meeting this requirement. That means no pizza parties or candy sales.

Greene structures its walk-a-thon so students collect pledges from the surrounding community including restaurants, businesses and the wider McKinley Park neighborhood. With the support of the PE teacher, the school dedicates one PE period where students walk around the schoolyard to meet their walking goals and raise funds for their school.

But Greene is showing just how many ways there are to raise money. For Valentine’s Day, traditionally a candy-saturated holiday, Greene allows students to send flowers and poems to their friends. “For Valentine’s Day, there’s no candy that’s allowed,” says Vibha Sanghvi, the assistant principal. “Something that interested the students was sending flowers and a poem. We took the interests of the students and the school to find a fundraiser that worked.” And it’s working; last year, that fundraiser raised $800 to go toward developing the school’s science program.

The school also holds father/daughter and mother/son dances in the gym. These are really popular events, says Sanghvi, and often sell out. Each of these events generally raise about $800.

Another fundraising effort that goes on throughout the school year is holding $1 jean days two Fridays a month. Normally, students wear uniforms at Greene, but during this fundraiser, they have can contribute $1 for the privilege of wearing jeans. “Students see this as an exciting opportunity to express themselves,” Sanghvi says. “They are really eager to bring their dollar in.”

Sanghvi recognizes that changing the culture at the school level is hard because of traditions and the school community, and it was hard for Greene when they first started. “In order to really make that policy something that was honored in the school, it took a lot of education and promotion,” she says. “It took a strong commitment from teachers.”

That commitment from the teachers has been key to making sure the students are receiving a consistent message about what food is acceptable in the school. “If we really want to be true to this vision and the school culture, we need to stick to these practices and make sure teachers are modeling these behaviors” Sanghvi says. “Seeing the teachers model the behavior motivates them to do it as well.”

That role modeling makes it easier to support healthy fundraisers. When the students and staff are healthy every day of the school year, it just makes sense that fundraisers would be healthy, too.