Reflecting on an Exemplary Career in Green Cleaning Leadership 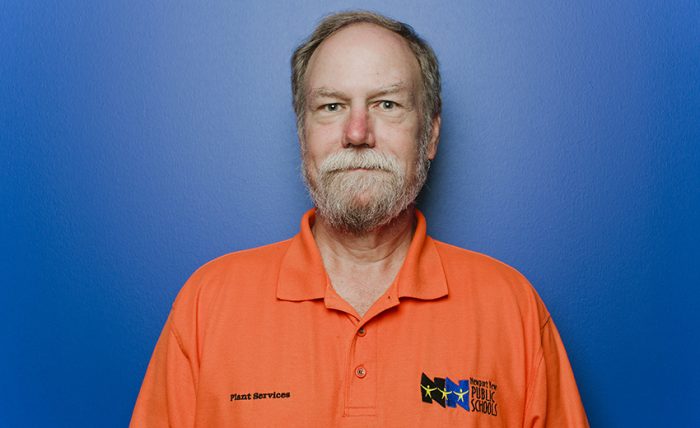 Keith Webb, Executive Director of Plant Services at Newport News Public Schools (NNPS) in Newport News, Va., has been a member of our Green Clean Schools Steering Committee for more than five years, but he has been leading the green cleaning movement for two decades. After a career spent building an award-winning green cleaning program for NNPS, Keith has announced that he will retire in the new year.When we first met Keith, his school was applying for the Green Cleaning Award for Schools & Universities in 2012. Believe it or not, his school did not win that year. But they kept at it, and applied again the next year and won! This persistence and commitment to advancements in green cleaning exemplifies Keith’s career.But this isn’t the only award Keith and his team have received over the course of his tenure with NNPS, by any means. In 2011, his department earned the prestigious Facility Masters Award at the Platinum level from the National School Plant Managers Association (NSPMA) in conjunction with the Virginia School Plant Managers Association. And just this year, Keith himself was the recipient of the National School Plant Manager of the Year for 2019 through the NSPMA. Talk about going out on a high note!When Keith accepted his latest award, an incredible honor in the field of school facilities management, he was asked to give a speech. For Keith, that speech was an opportunity to reflect on what he believes has been the secret to his success and the strides he has been able to achieve in green cleaning: his team.“It’s always my team that enables whatever happens. If you think of what we do like an orchestra, then I’m just the conductor,” he said. “It’s everyone else doing the work. Without my orchestra, I’d be nothing. I feel that way in so many parts of my life. I’m pretty good at enabling or putting together the spare parts and coming up with a cohesive group or plan. It’s a good formula for me.”When Keith began in his role as Executive Director, he had the rare opportunity to create his custodial department almost from scratch. This allowed Keith to focus on some of the hiring and retention techniques that he knew would enable him to attract excellent talent and build a team of people like him, who were committed to protecting the health of their students, the community and the environment.Keith realized that most custodial teams have two types of positions: those that are paid hourly and those that come with benefits and a salary. He figured out a way to hire only salaried employees with benefits and job security so that he could attract staff that was vested in the job. Without laying anyone off, Keith was able to rearrange his team and eventually eliminate 54 part-time positions through patience as people left through natural attrition. With the money he saved, he invested in green equipment like HEPA-filter vacuums, microfiber, electrostatic sprayers, and engineered water technology. By focusing on building a custodial team of employees who were fully engaged in a career and redirecting money toward green equipment, Keith started to lead the field in green cleaning at NNPS.“My peers at surrounding schools started to look to what we were doing for advice,” said Keith. “They would call us because we were making the right decisions and everybody knew we were making the right decisions. That’s when we realized we were green.”After 27 years at NNPS, people started to joke with Keith that he was never going to retire. But as they joked that his retirement was perpetually “five years away,” Keith began a quiet plan to identify key leaders in his group to prepare for even more responsibility. He began having key conversations with his direct reports to ask them about their plans and goals for the future. He advises anyone who finds themselves at the top of their game in their career as a director at a facilities management group at any school to continually think ahead and identify possible successors. Keith has put a lot of work into building NNPS’s green cleaning program. He wants to make sure the program continues to lead long after he retires, afterall.What’s next for Keith? An active volunteer and member of the board of the Shriners Hospitals for Children, Keith plans to spend more time working with this organization on its work in community children’s hospitals during his retirement. He will continue to serve on the Green Clean Schools Steering Committee and present at our Green Clean Schools events, including an upcoming panel at ISSA North America in Las Vegas.Keith has four young grandchildren, including a new grandson named after him. As he spent his career building a movement that will protect their health and preserve the environment for them as they grow up, now Keith can spend some of his spare time enjoying more quality time with them.
Previous
How Connecticut Is Addressing Students’ Mental and Physical Health
Next
Increasing Access to Mental and Behavioral Health